I’m overcome with the urge to tag every single entry as “barf” and call it a day.

I sent out a few e-mails out yesterday publicizing this place to friends.  It felt really yucky, like I was parading around my dirty laundry.  To add insult to injury, I managed to write the wrong blog address on not only the initial e-mail, but the also the SECOND e-mail I sent out to remedy the first one.  As a Freudian, I decided that two times made this a meaningful error.  Also by that point I was far too ashamed to send out a third e-mail directing people to a blog they likely have no interest in reading.  In addition to being a malignant narcissist, I’m an entirely ineffective self-promoter.  What a combination!

So, if you made it here and it wasn’t particularly easy on account of all the misdirection, thanks.  Seriously.  I’ll try extra-hard to keep you entertained.

About a year ago I scoffed pretty hard at a Style Section article about Seasonal Affective Disorder.  A+ for a culture that produces acronyms that makes more sense than the names of the diseases they abbreviate!  It was easy to scoff at home UV lamps, of course, from my warm little existence in Orange County. You know, that place where it rains like once or twice a year and everyone scampers around in flip flops and glorified sweatsuits?  Cut to the present day and man, oh man, am I sick and tired of this grey, rainy weather.  I’m tired of wet shoes, carrying around an umbrella, the smell of wet wool on the métro, and this half-assed version of “daylight” that begins sometime mid-morning and ends before 5 p.m.  You might even say it’s making me SAD!

Puns are certainly the lowest form of humor.

I was kvetching about this (the lack of sunlight, not puns) with some friends and a Londoner said that he didn’t know what to make of my complaints.  “I like to be my own little ray of sunshine,” he impishly declared.  I feel sheepish at my total lack of that particular varietal of self-sufficiency.  I’m officially one of those people ruined by California, the ones who complain when it is anything less than sixty degrees and sunny. 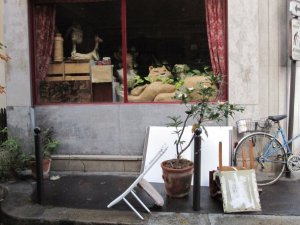 Someone who had held out for a long time on joining Facebook got on the boat last week.  He suddenly appeared on my radar with dozens of friends and a readymade knack for the clever status update.  I was disappointed to see that he disappeared after three days.  I sent him a standard “quitter or defriender?” query.  He wrote back to say that he had realized how toxic the place is for things like “productivity” and “sanity” and he wisely decided to depart before things got too serious.  Oh, to go back to the time when things weren’t too serious between me and FB, as I hear the kids are calling it these days.  To be able to depart before things got too complicated! Lemme tell you what, I’d sure like to be the dump-er in that scenario.  If only there was a way to say to a social networking device: Look, I’m really sorry.  It isn’t you, it’s me!  I know that you provide a valuable service to many of your users!  How did anyone ever remember wish anyone else a happy birthday before you came around?  Especially since the recent sneaky shift in the privacy standards, you make it easier than ever to stalk high school boyfriends and old coworkers!  But this just isn’t working out.  I’m sure you are going to make your next five million users (largely women between the ages of 55 and 70 apparently) really happy, what with all the posting about cats and grandchildren that your relationship will surely enable!  You deserve someone who will appreciate you like they will, not just someone who is in the habit of being in your company.  Trust me, this will be better for both of us in the long run.

But as any addict will tell you, deactivation is like taking a break but never really breaking up.  Facebook is the bad news codependent boyfriend that will always take you back when you are feeling weak, the one who remembers every single petty detail of your relationship and plans to rub them in your face when you shuffle back with your tail between your legs.  So good for you, S, for getting out before it was too late.  Wish I could join you out there on the other side.