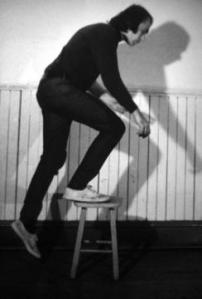 Last night I saw Vito Acconci (middle name:  Hannibal!  Thank you Wikipedia!) give a really fantastic poetry reading and multimedia talk on his career at the Centre Pompidou.  I can tell you the exact four people who read that last sentence, said “SNORE!” to their laptop screens, and abandoned this blog for the day.  It’s cool.  I’ll catch you guys next time when I’m writing about my ingrown toenails or somesuch.

The event, loosely billed as “Expériences de langage à New York,” began with an opening act of two young New York poets who are basically the kind of guy that I would have never known existed had I not gone to graduate school, James Hoff and Danny Snelson.  I mean that in the best possible way.  I’m so grateful to know boys like this exist.  I feel terrible for women forced to move in social circles where the only operative notions of masculinity are abjectly meatheaded.  Complain as I occasionally may about the stereotype, I’d rather hear some former gifted-and-talented kid turned bowtie-wearing, bird-boned savant wax on about his LP collection in his apartment of well-appointed flea-market furniture than watch football with some baseball-cap wearing townie in a dingy basement any day of the week.  This is all to say that in addition to being startlingly fascinating, Hoff and Snelson were completely adorable.  Their talk was what they describe as “an experiment in performance editing and live data processing,” more or less a free-form associative presentation of things they had found on the internet that they thought were really cool.  They encouraged the audience to ask questions in the midst of the performance and to leave their cell phones on (“the more disruption, the better!”).  They obviously didn’t realize they were in France.  But where they nailed it was in their rhythm: a sporting, interrupting, back and forth between two guys with similar esoteric interests (serial killers, New York experimental poetry, noise music, unauthorized bootlegs) trying to get your attention.  Here’s what their website says about the larger project, Endless Nameless, from which last night’s performance was extracted:

Endless Nameless is a one-year No Input Books publication by James Hoff and Danny Snelson. The project began in November 2008 as Hoff and Snelson began purchasing used hard drives and filling them with a variety of digital objects in text, image, hypertext, sound, and moving picture. Each of these print-on-demand hard drives is a fully functional archive cataloged by publisher and year.  Endless Nameless presents a double articulation of popular data trafficking along with the material histories of our digitally dislocated artifacts.  Cataloging this ‘nude media’ by original source, the book loops these distribution circuits in a nostalgic allegory of publication:  celebrating the publishers while disseminating huge amounts of information.

You can apparently purchase these functional hard drives as archives that represent the labor of these obsessive searching and cataloguing efforts of Hoff and Snelson.  I suspect that one of these might make a fabulous Christmas present for the Neu!-listening, bird-boned LP collector on your own list.  That’s right!  We give Christmas shopping recommendations in January here at Keeping the Bear-Garden in the Background.  Run with it!

The main event of the evening was of course Acconci, whose work I will admit I knew pitifully little about before last night.  Of course I had gotten the standard three-minute rundown in Art History 101 of Seedbed (1971), the infamous piece in which Acconci lay under the ramped gallery floor of the Sonnabend Gallery and fantasized over loudspeaker about the gallery visitors while masturbating.  I had a more intimate encounter growing up with Dirt Wall (1992), a large-scale installation work at the Arvada Center in Denver, Colorado that replicates the sedimentary layers of soil and rock in the area behind enormous glass panels.  I used to sit on the thing while waiting for youth symphony practice to begin (dork alert!).  But I knew nothing of Acconci’s early work as a poet and was thrilled to listen to him read his poetry, all of which demonstrates his deep fascination with the systemic nature of language.  Like his later performances, installation works, and architecture, Acconci’s poetry all begins with an operative rule or concept.  The aesthetic outcome—be it a poem, an image of a performance, a photograph or video, or even a building—is something of an after-effect.  My favorite of Acconci’s language-based pieces were built on his career-long obsession with Roget’s Thesaurus, which he rhapsodized about at great length as “an idea-loosening system.”  In an interesting anecdote, Acconci talked about how Roget’s formed an important starting point for Seedbed.  Acconci knew that he wanted to be under a ramp on the floor of the gallery, but he had no idea what he would be doing down there.  Browsing through Roget’s, he moved from floor to foundation to undercurrent to seedbed to masturbation.  Again, the concept preceded the act, and reading the thesaurus was a mode for Acconci to  “hypnotize myself into having a starting point.”

Acconci feels that there are two basic ways of dealing with the self, which always must exist in some kind of pairing if it is to gain legibility in the first place.  In the first pairing, the self is both subject and object (exemplified by Acconci’s works like Trademarks of 1970, in which Acconci bit himself and then smeared the resulting marks with printer’s ink so that they could be used as stamps).  The second type of paring is between the self as subject and the other as object, or as Acconci says, “the I together with the You.”  This understanding is present in Following Piece of 1969,  in which Acconci videotaped his tailing of strangers, following them to places “where I didn’t know I could go.”  Acconci is savvy to the fact that such a piece was dependent upon his urban milieu, “where somebody is always following you, and you are always following someone.”  Acconci noted that following a complete stranger in a small town would be “victimizing” him or her.  It is easy to make the leap from the enabling impersonality of the city to the anonymity of the internet.  But I don’t know if Acconci himself would make that facile comparison.  In fact, he argued last night for an increased personalization of computer technology.  “Treat the computer as a companion or a pet,” he urged.  “Nudge the computer to act with you, not for you.” A welcome recommendation to those of us who often fall asleep with our breathing in tandem with the white light-pulse of our MacBooks. Not me, of course. 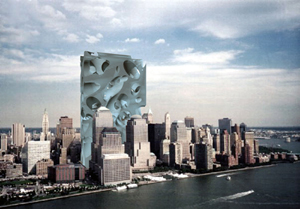 Perhaps most amusing was Acconci’s commentary on the most recent phase of his career working as part of an architectural co-operative. Acconci turned to architecture because he was already treating galleries and museums as public spaces, but realized “who was I kidding – a gallery or a museum is never going to be a public space!”  Among his architectural projects, which remain largely unbuilt, is a proposal for the new World Trade Center.  The building is full of holes, a pre-exploded skyscraper.  “A terrorist looks down and thinks to himself ‘We don’t need to bother with that one!  It’s already been dealt with!’”  Cheeky, yes, but the schematics were actually quite mesmerizing, with public garden spaces intermixed in the gaps of the building, turning the notion of a private building with a public front plaza on its head.

Some jerk-off in the audience asked Acconci where beauty figured into his work, and Acconci responded that beauty “had never been a word that meant anything to me.  It seems to me too close to rest.”  Yet his work has beauty in the interstices, and there was something very moving about watching Acconci tear up as he recalled the last scene of L’Année dernière à Marienbad, which he claims to have watched around fifty times.  His unabashed enthusiasm for popular films and music was infectious  (“Everything before the Velvet Underground was country music!”), and it was evident how that verve had influenced younger artists like Hoff and Snelson.

There is a nice interview with Acconci online, if you are curious: