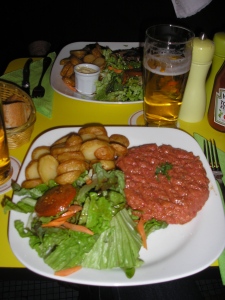 One of my earliest memories is of helping my mom make meatloaf.  As any good meatloaf chef will tell you, it’s best to mix the ingredients together with one’s hands so that everything doesn’t get too overworked.  I was always the designated hand-mixer.  I loved doing it, not just because the feeling of cold raw meat between my fingers was pretty divine.  I loved it because when she wasn’t looking, I could totally sneak a clump of raw beef, egg yolks, and onion to eat.  This memory suggests that Clarence has been around for a long time, the dirty little bastard.

Fast forward to the present day and I find myself in the dreamy position of living in a culture that actually sanctions eating that sacred combination of raw filet, shallots or onions, egg yolks, and capers. Oh, yeah, throw in some mustard and Worcestershire sauce. Can I tell you how much I love steak tartare for a moment? I love it more than almost anything. I love how it looks. I love its name – supposedly to commemorate the Tartars, fierce warriors who wouldn’t stop riding to build a fire to cook and instead ate their meat raw. My boyfriend Wikipedia tells me that a variation on this story is that the Tartars kept their meat under their horses’ saddles so that it would be tenderized by their riding. My boyfriend also tells me that steak tartare used to be called steak à l’Americaine, which cracks me up because most Americans would shudder at the idea of eating a pile of raw beef. But serve it with a salad and some fries and you’ve got standard fare at any Parisian bistro.

I had a pretty killer steak tartare last night at one of my favorite places in the Marais, Le Pick-Clops.  This place has such an excellent vibe.  Everybody is so nice.  The waitstaff is nice.  The bartenders are nice.  The patrons are nice to each other (and nice-looking). It’s nice in the morning for brunch, nice in the afternoon for a coffee and some grading, and nice in the evening for a rum punch and dinner.  It also seems to always attract one real character.  Last night it was an adorable older woman who kept on her full-length mink coat and red hat and didn’t budge from her fizzy water for the two hours we sat there.  I took a picture of her for you while pretending to take a picture of my friend B.

The one drawback is that Le Pick-Clops is loud, but not like The Yardhouse on a Friday night in Newport Beach is loud (that reference is for YOU Orange County!).  The soundtrack is amusingly questionable.  During the first afternoon I spent at Le Pick-Clops, I listened to the entirety of Nirvana’s Nevermind followed by an indeterminate Eminem album.  But most of the time it is a standard hipster mix that gets progressively more electronic as the night progresses.  B was wincing slightly by the end of our meal, I was fist-pumping.  Different strokes.

The décor is totally charming, kind of a dressed-up 1950s style diner with multicolored Naugahyde chairs, Formica tables, Coca-Cola kitsch, lots of mirrors, and turquoise paint.  My favorite part is the ever-flattering pink, orange, and gold neon that provides the majority of the lighting (also the reason why I adore the bar at Le Palais de Tokyo).  I look excellent in neon (and so will you).  The food at Le Pick-Clops is really satisfying and the drinks are a bit more creative than what you see elsewhere in Paris, which not really a town for cocktails.  While the steak tartare is sublime, if you are feeling a little less bloodthirsty, try L’Inca salad, comprised of mixed greens, lentils, quinoa, and avocado (the latter two things are pretty rare on the salad front around here).

Final note for French language dorks:  We Anglophones puzzled about the name for a while, but I asked the bartender tonight and he explained that it means a person who bums cigarettes.  How excellent to have a such a word.