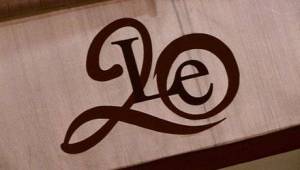 Back when I was young, young, young, I lived in Paris for a semester of study abroad. Oh yes, a semester of study abroad from my expensive East coast private university! You know, just like the kids I ruthlessly mock when I am out and about! I am a total hypocrite!  In my defense, I don’t think I was the worst of the worst when it came to being a study abroad stereotype. I was the one who wandered around alone a lot, occasionally breaking up the wandering with reading in cafes and quietly weeping in parks. Which is certainly a study abroad stereotype, but a less offensive one than the kid who spends every weekend in a different European city getting wasted on his parents’s dime.

One of my friends during college happened to live on the rue de Bellechasse during this period of time over a just-opened restaurant, the rather uncreatively named Le 20 de Bellechasse. Her apartment was improbably nice for a Parisian apartment, perhaps more so than I even remember (I was still too young, young, young to know that having a washing machine is pretty luxurious in this town). Come to think of it, the area around the restaurant is actually a strange area for a young person to live. It’s a bit of a walk from the hopping area of St. Germain des Près. It’s only a few blocks from the Musée d’Orsay, but at night it is pretty deserted with the exception of Le 20. But Le 20 is a tiny, bustling haven if you find yourself on that side of town. It might even be worth a detour.

A and I happened to find ourselves wandering aimlessly around the Left Bank last night after watching Antonioni’s 1957 Il grido. We had debated between that and a documentary about a bloody Malaysian military coup but decided that the Antonioni might be less of a bummer. Wrong answer! Unmoored by all the existentialism, and the bleakness, and the suicide (ugh), neither of us had much of a sense of what we wanted to eat. We got to the point where we were going into restaurants, sitting down, looking around uncomfortably, and then leaving, only for A to moan something like “I mean, they were going to burn the fields to put in an AIRSTRIP! In that shitty town?  Really!?” Apparently despite his adeptness in dealing with warlords, I have a softie on my hands. At any rate, after traversing St. Germain and contemplating everything from seafood to Tex-Mex, I finally suggested that we head east to Le 20. 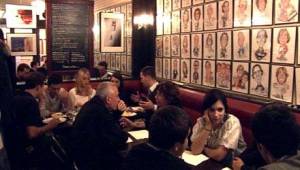 Le 20 is one of my go-to places for visitors. I brought some dear family friends there on their first night in Paris.  I brought my mother and B there on her last night in Paris. It’s always heaving with a splendid-looking young professional crowd and run by a group boisterous young guys who seem to know everybody. Sébastien Tellier is on heavy rotation on the stereo. The menu is unfussy, often seasonal, and written on chalkboards posted around the dining room. They have your basic French bistro fare, from an excellent steak tartare with enormous capers to a dreamy noix de saint Jacques au beurre noisette (scallops in a brown butter sauce). They handle meat especially well at this joint;  I’ve enjoyed their entrecôte, their lamb chops, and their bacon cheeseburger – all served decidedly saignant should you desire. Here is the vocabulary lesson I wish I would have had in Madame Snow’s high school French class (if had gone more often):

In France, when they say “saignant,” they mean medium-rare. Nothing peeves me more than what has happened in the United States with the Chilis-ification of hamburger cooking. If your beef is too frightening to be served anything less than well-done, then you shouldn’t be serving it in the first place. It’s bad enough that the vast majority of beef sold for hamburgers in the U.S. is already fatless, dense, and bland, but to serve it grilled to grayish-brown is like getting hit in the face. American food-poisioning paranoia is indicative of a lot of different collective anxieties and that rant is better saved for another day. Suffice it to say that nicer restaurants ought to grind their own beef in house so that the constant low-level fear of poisoning their lawsuit-happy customers doesn’t prevent them from cooking everyone’s meal to the temperature they desire. 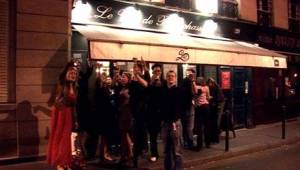 All this is to say that they cook a really good burger at Le 20. Two of them and a couple of pints quickly pulled A and I out of our Antonioni-induced funk. Oh, and did I mention the fries, which come out on huge plates for everyone to share? Perfect. We didn’t stay for one of the best moelleux au chocolat (molten chocolate cakes) in Paris for my money, but if you find yourself at Le 20, you certainly should.

Details:  Open everyday for lunch and dinner except Sunday. A great place to grab a bite after visiting the Musée d’Orsay. The moelleux au chocolat takes twenty to forty minutes to prepare, so think about ordering it with your meal.