Despite having eaten perhaps the largest and best meal of our lives the night before, we awoke early to try our hand at the hike from the car-accessible Caletta Fuili to the beautiful Cala di Luna beach, accessible only by foot and boat.  Our friends S and H had done a longer hike (called the Codua di Luna, which apparently takes you through a gorgeous river valley) during their winter visit to Sardinia, but with summer temperatures B and I decided to do an “easier,” shorter hike that would keep us along the coastline.  Snort.

On the way, we stopped in the small town of Dorgali, which is very similar to Oliena in its lack of tourist infrastructure. We found an unremarkable supermarket, where we nevertheless spent a good half hour or so cooing at the various regional offerings. Is there anything better than exploring a supermarket in a foreign country? I can skip the most important national monuments entirely if it means that I can hang out in the canned fish, cheese, or deli sections of a European supermarket for an hour or so. After carefully considering our picnic options, we bought some sliced Sardinian mortadella, a wedge of Pecorino cheese, and some beautiful foccacia-like spongy flatbreads.  Travel is an excellent way to get to know more about somebody, and one of the things I discovered about B is that this guy has an almost elemental love of mortadella – which, let’s be honest, is basically the boloney of the Italian deli counter.  But even I had to admit that Sardinian mortadella looked like something special, with big peppercorns and pickles buried in the enormous round of pressed meat.  The Pecorino recommended by the woman at the deli counter was pretty young, as it could be easily sliced with our amazing pocketknife, which had proved itself time and time again on the trip.

Nota bene:  I suspect I’m making it sound as though we were having these profound, in-depth conversations with local Sardinians.  We weren’t, or at least, I certainly wasn’t.  B did an admirable job of transforming his dusty Spanish into something at least comprehensible to an Italian speaker.  I suspect this mainly involved adding a lot arbitrary vowel sounds to the ends of words, though my language-fanatic boyfriend might want a bit more credit for his intuitive grasp of Latinate tongues.  And me? Well, despite having traveled quite a bit in Italy, I’m stuck with little more than “Buon giorno / Buona sera / Buona notte / Ciao / Arrivederci / Per favore / Grazie mille / Scusi.”  Which, accompanied by a smile, will do you just fine in most of Italy.  Living in Paris has helped me perfect my “face of total listening comprehension,” so Sardinians would rattle on and on to me and I would smile and nod, smile and nod, thank, and then turn to B and say “What the hell just happened?” But we got around just fine with our limited grasp of the language, and so can you.

With our backpack full of treats, we headed to the trailhead.  Driving from Dorgali to Cala Gonone takes you through a long tunnel that goes directly through the huge mountain range against which Oliena is nestled, spitting you out on the coast.  I had no idea that we were staying so close to the beach, as there were craggy peaks blocking the view and providing the illusion that we were deep in inland Sardinia.  Arriving at the trailhead, we were stopped by an “Australian” in suspiciously official looking garb.

“Hiking to Cala di Luna?” he asked us.

“Well, let me give you a little information about the hike.”

Broseph proceeded to go on and on about the extreme difficulty level of the two-hour hike we were about to take, and how nobody, repeat nobody, ever does the return hike. We would definitely want to take a boat back from the beach, and the limited boat service would surely not take us anywhere near our car. He represented a local cooperative that would happily schedule us a return boat trip directly to our car that afternoon, but we had to pay up front. He would cut us a deal, only 20 euros for both of us.

I don’t know what it is about my superego composition, but I am such a sucker for official-looking scam artists. Put on a uniform, speak good English, pretend like you are acting in some kind of official capacity, and I’ll just open my wallet like the dumbest, greenest American tourist that was ever born.  Thank god I was with B, who greeted the guy with immediate suspicion and politely turned down his offer. “We’ll see when we get to the beach how we feel,” B explained, “I suspect we will be doing the return hike.”

The “Australian” (B thinks he was an Italian who had learned English in Australia, which goes to show how little of an ear I have for accents) sighed skeptically and said “Well, let’s just say I told you so.”

Boom! If you ever want to really fuck with my head, simply say “Well, let’s just say I told you so.” I was wracked with anxiety that we had made the wrong decision and that we were going to be stranded and exhausted once we arrived in Cala di Luna. B, in his perpetually Zen manner that I was beginning to realize is a lovely counterpoint to my penchant for being high-strung, assured me that everything was going to be fine.

Well, the “Australian” was half right – the hike was killer.  I mean, we’re talking scrambling over rocky precipices, uphill all the way, poorly marked, thrashing through the underbrush, just plain difficult.  And I’m not a total wimp when it comes to hiking, either! But it was a lovely bonding moment for B and I, however, as we helped each other (okay, mainly it was him helping me) down difficult planes of rock and through tight passageways carved out of the cliffs.  And, let me just say for the internets at large:  two hours my ass.  This is a solid three to three and a half hour hike.  I say this because both Corsicans and Sardinians seem to lowball the tourists on this kind of estimate.  I’d add an hour to whatever you are told if you are hiking on these islands.  Moreover, we found the supposedly “popular” hikes are entirely deserted; so don’t expect to encounter anyone on your trip.  We didn’t meet a single person on our hike to Cala di Luna.  I entertained the worry at one point that we were just bushwhacking into the Sardinian wilderness to be eaten alive by wild boars.

But after one of the sweatiest, most grueling hikes of my life, it was pretty sweet to come over the crest of a hill and see this:

As we climbed down in the valley, we were greeted by bells.  Who greeted us but these guys: 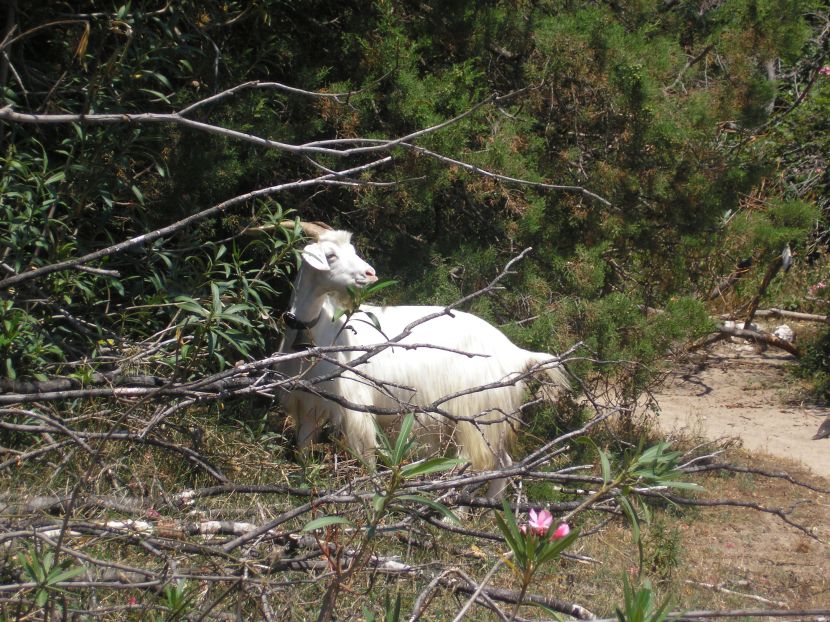 Cala di Luna was pretty busy, as large ferries dump hoards of tourists off from Cala Gonone, the nearest resort town.  There is a bare-bones restaurant and a scuba and snorkel rental stand on the beach. But after our serious hike, we felt like we owned the place in a way that no portly boat-taking couch potato ever could.  We immediately treated ourselves to a much-deserved first round of Ichnusa on the trip:

The beach at Cala di Luna is one of the most amazing things I’ve ever seen.  On the south end, a white sand beach runs between a placid lake and the sparkling turquoise waters of the Mediterranean.  As you move north, the beach is under these incredible cliffs that are carved out of the side of the coastline.  This means that you can sit in the shade, a revelatory experience for Little Miss Sunburn over here. As you continue on, the coastline erupts in a series of amazing caves and grottos that go deep under the earth. 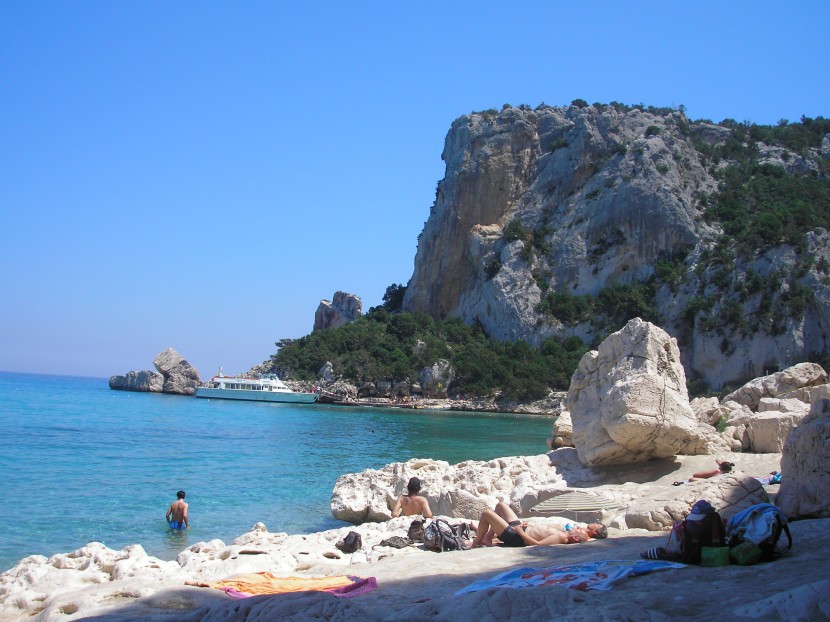 I gleefully swam until waterlogged and B explored the caves with great enthusiasm until he accidentally happened upon what must be the makeshift bathroom facility for the beach, barefoot.  Oops.  After a thorough wash-down, we then shared one of the best lunches of our trip from our supermarket cache: 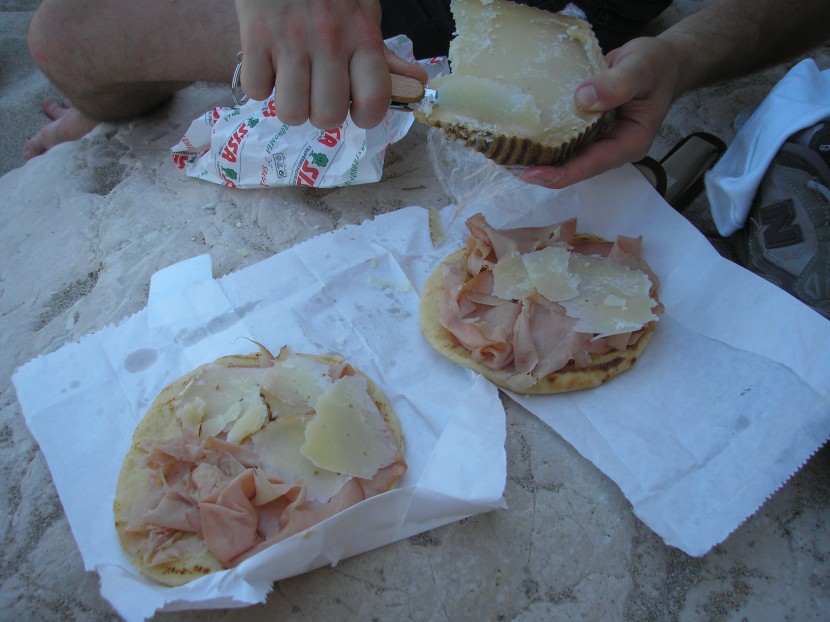 Finally, we were happily vindicated to discover that taking a boat back to our car was an easy proposition and only cost 5 euro a person. B wanted to hike back, not because he wanted to endure the hike for a second time, but because he wanted to prove the “Australian” wrong. I reasoned with him that taking a 5 euro boat ride with one of his competitors was vindication enough, and that furthermore I would write about that scam artist on my blog, so all six of you that read this thing would be the wiser.  More exhausted than vindictive at the end of the day, B settled for this compromise.

SO, should you ever find yourself visiting the Eastern coast of Sardinia and wanting to visit one of the best beaches in the world, may I recommend that you hike from Caletta Fuili to Cala di Luna?  And when some guy assaults you at the trailhead with worrisome threats and demands your cash, you might want to spell it out for him:

That night we ate at the restaurant at Coop Enis (still funny!).  It was decent, but after our meal at Guthiddai, it was a bit of a letdown.  We did, however, get to sample pane frattau, which consists of moistened pane carasau topped with red sauce, grated Pecorino cheese, and a poached egg:

It’s kind of like the Sardinian version of huevos rancheros and it is equally earthy and satisfying.  We also drank the bar none best bottle of wine of our trip, a Cannonau from Oliena (oh why oh why didn’t I save the label?!). I was entirely unaware of the drop-dead fantastic wines that are made in Sardinia, especially in the Oliena region. Sardinia is trying to up their export business, so you might be able to find some of their larger vineyards in your local serious wine shop in the US or France. I can’t recommend the Cannonau red wines from the Nuoro region of Eastern Sardinia enough, and I suspect you will get some serious bang for your buck as these vintners are trying to up their visibility on the international wine market. Enjoy!

Next stop: We cross the island and enter the serious seafood leg of our journey. Stay tuned for squid ink pasta, grilled cephalopods galore, and the most impressive lobster I’ve ever eaten!