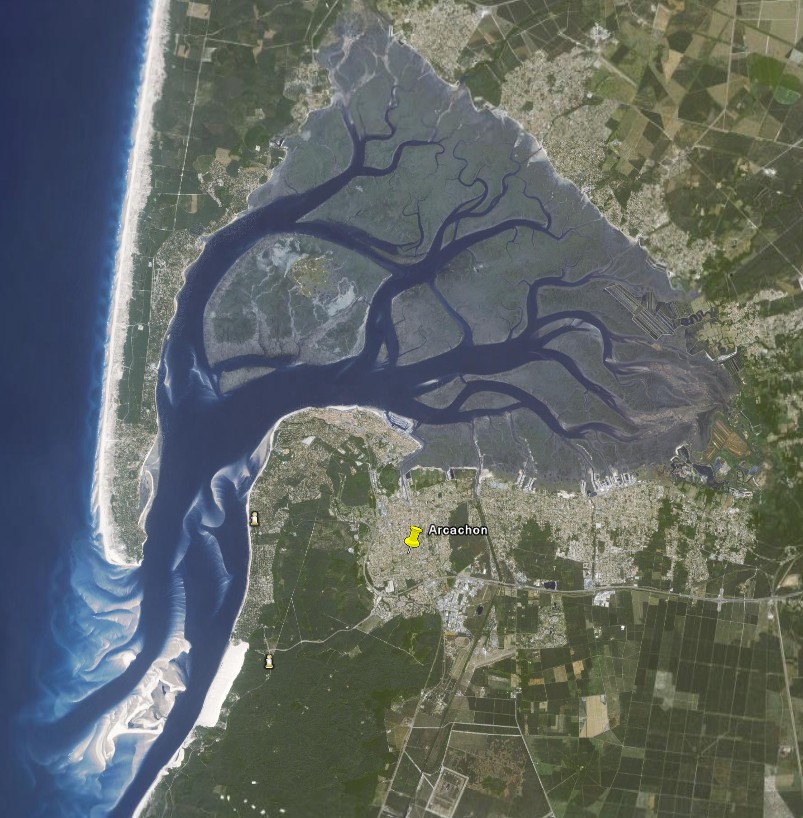 So it will come as no surprise to regular readers of this blog that I was pretty psyched for oyster season to begin here in Paris.  I’ll ‘fess up that I didn’t really know there was such thing as an oyster season until last year.  Before moving to Paris, I was the dirtiest kind of unclean eater, one that fed largely on bargain beasts at (still great!) Jax Fish House in Denver and Boulder during highly inappropriate summer spawning months.  How clueless I was!  Now I know that you should only eat oysters in months with the letter “r” in them.  I’m too lazy to figure out if that applies to the French names for months as well, but you get the point. Unless you want a mouthful of bivalve spooge, you might want to wait until autumn to commence your own private oyster holocaust.

During our long summer of boozing at Le Baron Rouge (1 rue Theophile Roussel, 75011 Paris, Métro Ledru-Rollin), we often heard murmurs about a fabled oyster truck that the Baron hosts on weekend days during the winter. My best girl MT’s arrival in Paris for a short weekend jaunt (my, aren’t we fancy these days!) seemed like the perfect opportunity to give the much-hyped oyster truck a shot. We arrived to find a throng of eager unclean eaters gathered outside the restaurant, happily slurping down oysters off plates balanced on the hoods of cars and bicycle seats.  MT and I pushed our way through the heaving restaurant to order four glasses of Sancerre, while the boys waited in line for our delicious bivalves. I was relieved to see our regular bartender in all the madness, a graduate student in medieval literature who likely recognized me as “the girl whose boyfriend always talks to me about the book I’m trying to read” and plucked my order out of the boisterous crowd. The guys splurged and ordered the 13€ a dozen fine de claires, but the 9€ bargain ones looked also quite lovely. All the shucking is done on temporary tables on the sidewalk, and this truck moves through a serious amount of oysters in the course of a morning. After only a little wait, we had secured 4 dozen oysters served with lemon wedges and mignonette sauce and some baskets of brown bread. I had (quite cunningly, I think) saved a windowsill for our unclean eating, which we managed to balance our treats on quite nicely: 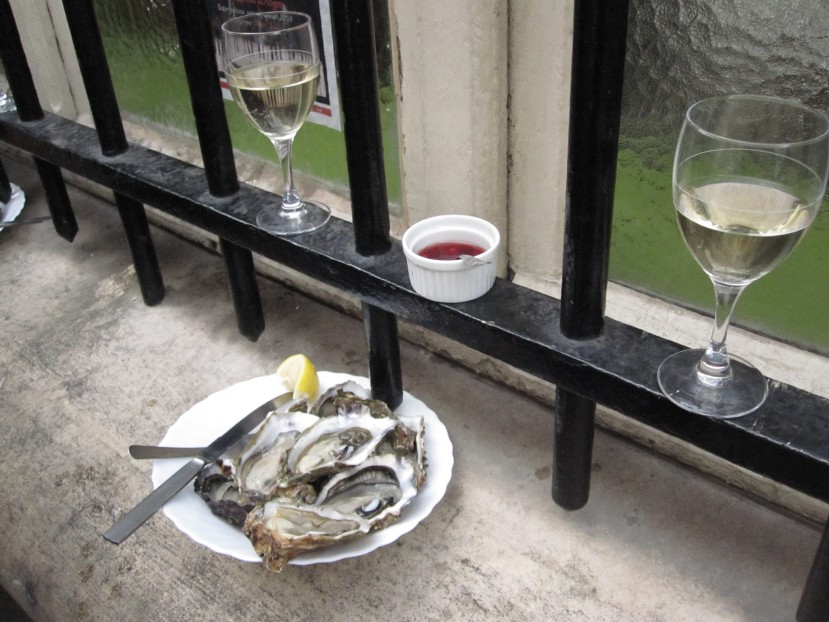 The best part was perhaps watching a five or six year old girl eagerly await the oysters her father carefully prepared for her. She slurped them down with delightful ease and clapped her hands in anticipation as her dad loosened yet another oyster from its shell for her to devour.  She ate a dozen by herself, and provided some consolation to the American stereotype of children that only eat grilled cheese sandwiches and buttered pasta. I know it’s easy enough to say “my future child will be an oyster-eater” when you don’t have a child, but I’ll go ahead and indulge this fantasy.  My future child will be a brilliant, witty, hyper-articulate, oyster-eating prodigy. Nobody better mess with her.

The other oyster revelation came in the form of La Cabane à Huîtres (4 rue Antoine-Bourdelle, 75015 Paris, Métro Montparnasse-Bienvenüe, tel. 01.45.49.47.27). We’d read glowing reviews of this Montparnasse oyster shack everywhere, and so a few weeks ago B, M, and I trekked southward in the rain. 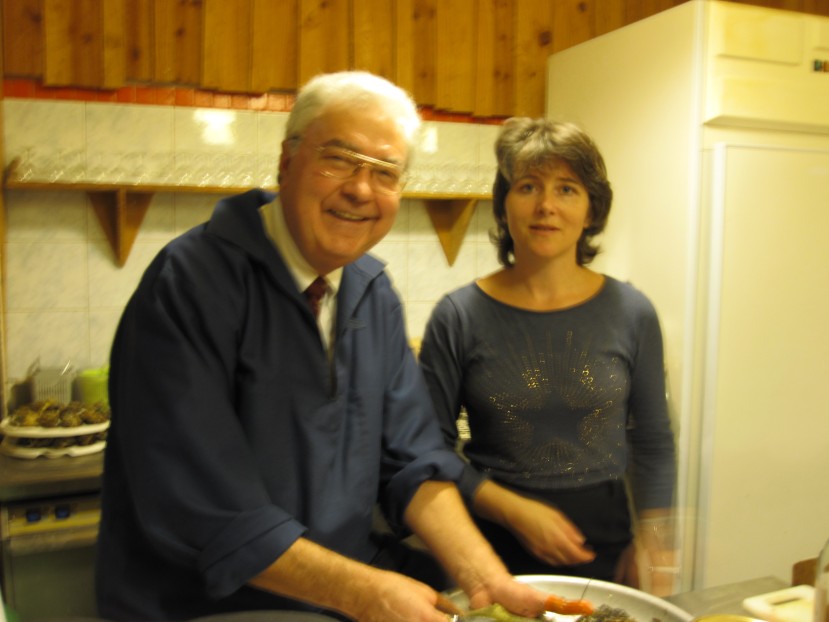 We were silly enough to not make reservations and by the time we arrived the tiny, wood-panel lined restaurant was packed to the gills (it only seats 20). The woman working behind the counter, Ségolène, shook her head, but her father, proprietor Francis Dubourg, beckoned us in and asked for the entire restaurant to move around to accommodate a new table. Everyone cheerfully scooted around and made room for us, some even passing chairs over their heads mid-meal. This same thing happened again when we returned this week for another pair of stragglers, but I would recommend making a reservation for one of these coveted tables.

Francis Dubourg is one of the last old-school oyster farmers in the Arcachon basin, an area of coastline about an hour outside of Bordeaux that is my new obsessive point of travel research. He is a fifth-generation oyster farmer, and his son now runs the farming and harvesting end of this family business. Several times weekly, super-fresh crates of Dubourg’s unusually shaped, amazingly flavored oysters arrive in Paris, where they are greedily gobbled up by his many fans. Dubourg and his family are some of the only remaining farmers that actually raise the oysters in the mud (instead of in bags placed on metal harvesting beds), making their care and harvest a far more involved process. The result:  these labor-intensive beasts taste more pungently of the sea, and the earth, and of the unique ecosystem that produced them (the French call this environmentally-imbued taste profile terroir). 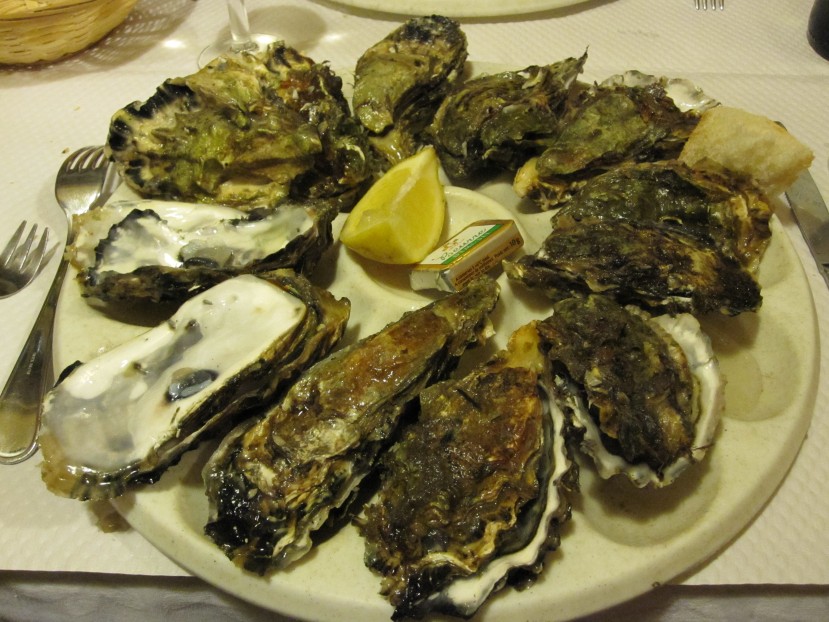 Whatever you want to call it, oh man, are they good. Compared with the commercially produced oysters we often see in the US, they look like a whole different animal. Irregularly shaped and covered in barnacles, these bivalves occasionally have a tiny red worm or two hanging out on the outside of their shells. Never fear – these little guys are only an indicator of the extreme freshness of these oysters (the oysters themselves, which are shucked fresh to order, are as healthy and delicious as can be). Part of the fun of the cramped space of La Cabane is that you often end up handing big plastic trays of oysters over to the other patrons.  This, along with perfectly-paired communal bottles of wine, makes the whole experience extremely convivial. 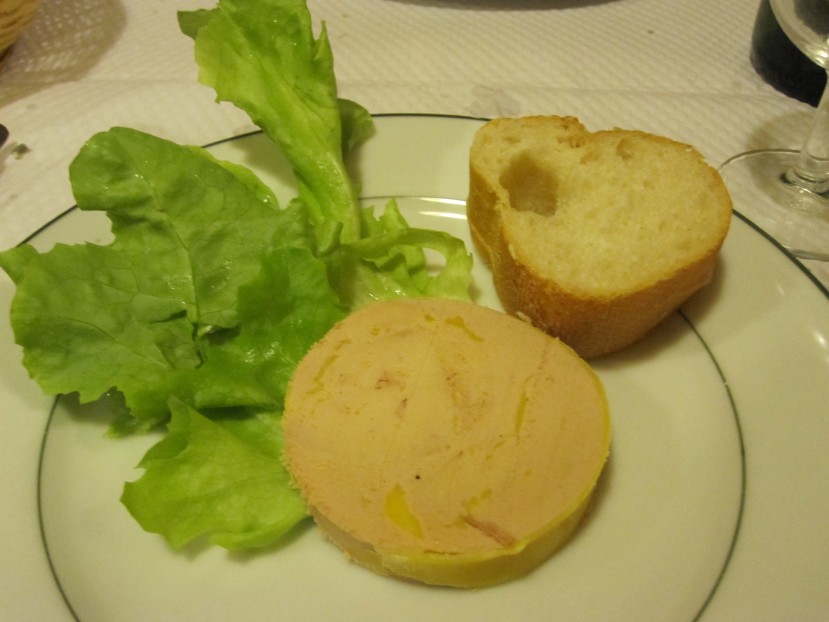 The other part of the fun?  Well, a dozen oysters is only one part of the meal. The menu also includes your choice of a sizeable slice of foie gras or a heap of magret de canard. 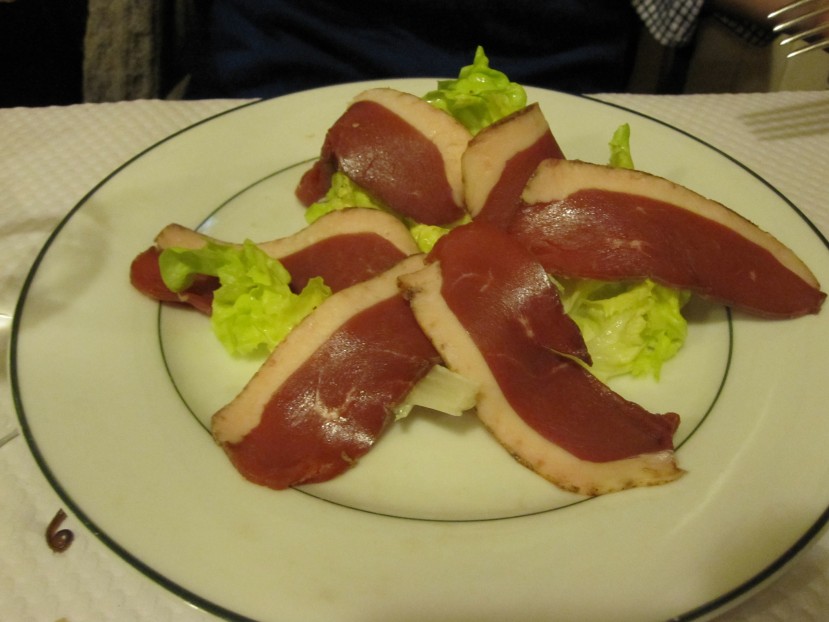 These are followed by a lovely cheese course of Tomme: 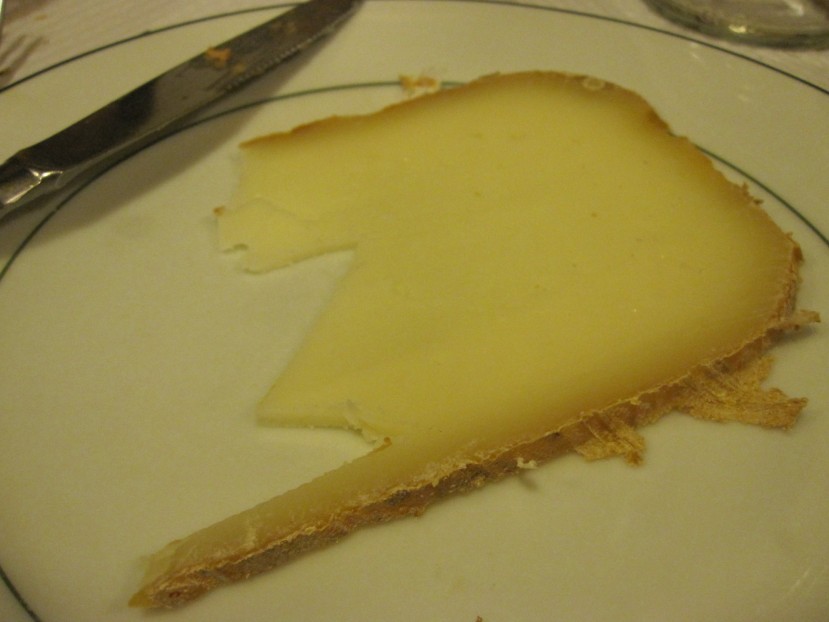 Finally your meal ends with a perfectly carmelized canelé, a special kind of custardy cake cooked to sepia perfection in molds made of leather. Paired with a stiff pour of Armagnac, it’s the perfect way to end an amazing meal. 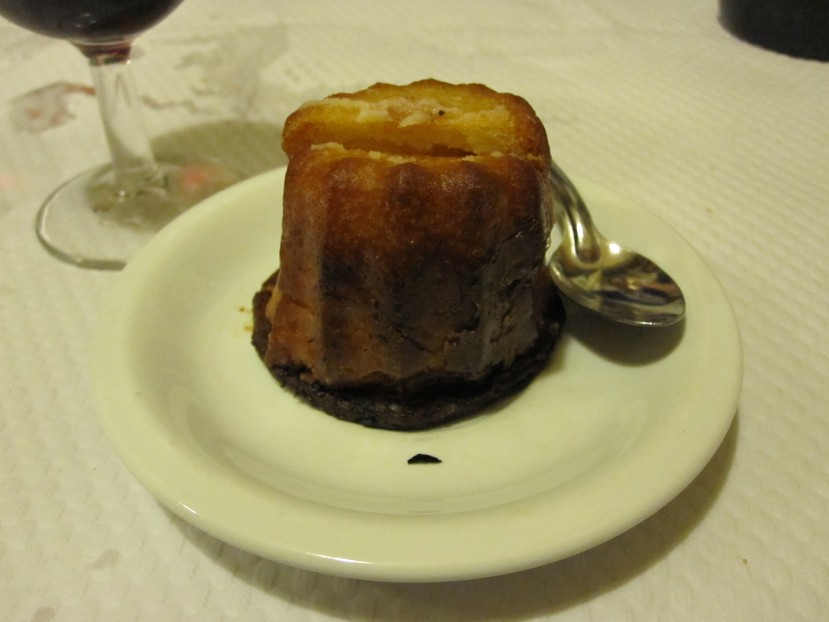 And the bill?  Well, I can’t seem to get an exact beat on how these things are tabulated, but it seems that we usually spend about thirty dollars a person. Given that our most recent meal included four dozen oysters, two plates of foie gras, two plates of magret de canard, four cheese plates, four desserts, three bottles of wine, four Armagnacs, and four espressos, I’d say we did pretty well.

La Cabane is just about the loveliest place you can imagine, run by one of the friendliest and food-devoted families in France.  Please go there if you have a chance.

Leave a Reply to B Cancel reply