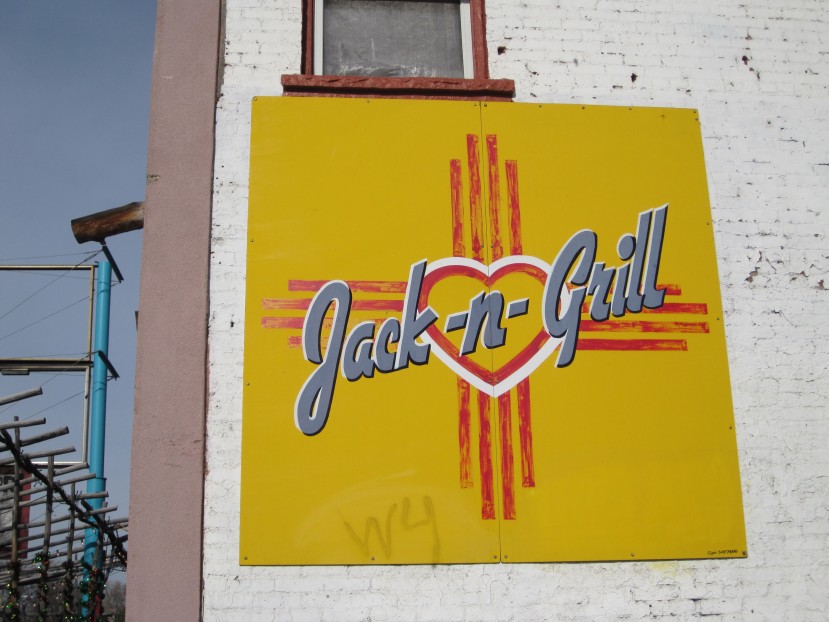 I am back in my hometown for the holidays. I won’t spell out the name of my hometown explicitly so as to maintain some kind of pseudo-anonymity on this site (snort, and let’s be honest: real life familiarity with me goes a long way in liking this blog, am I right?).  But anyway, I’m from a town in the mountains near Denver, Colorado, and not one of the shitty ones. You do the math.

My would-be glorious reentry into American life has been somewhat tainted by my affliction with the head cold that will. never. end. Seriously, I was sick for nearly two weeks before leaving Paris, and am still a snotty, grizzled mess a week and a half into my Colorado respite. That’s right, I just described leaving Paris as a “respite.” Go ahead and throw a rock at my mountain-home-in-a-not-shitty-Denver-bedroom-community. I certainly would if I were in your position.

But the fact of the matter is I haven’t been back to the States in nearly a year and a half, and I was longing for a break from some things. Like being jammed onto the RER every morning and spending a half hour my face in some French guy’s smelly armpit.  Or having to walk everywhere in a blizzard, only to discover that the thing that I have trekked to isn’t open at two p.m. on a Tuesday. Perversely, I was even getting kind of sick of French food. Everything seemed suddenly somehow too complicated and fussy. All I wanted was a burrito or a hamburger, a big box store, and my mother’s entire enormous house in which to luxuriate and watch reality television, preferably whilst in my sweatpants, which are apparently acceptable restaurant attire in this (not shitty, I swear!) mountain community.

Also, I basically couldn’t wait—I mean, chomping-at-the-bit couldn’t wait—to eat at Jack n’ Grill (three locations in Denver, but I like to go to the original location at 2524 N. Federal Blvd. Denver CO 80211), for my money the best New Mexican food in Denver. And I’ll put my money where my mouth is on this particular bet. I’ve already been there twice in a week, and I’m plotting my next visit as we speak.

What’s so great about this Jack n’ Grill, you may ask? There are plenty of places in Denver that you can get a burrito smothered in green chile. Silly rabbit. Lots of things are great and totally singular at Jack n’ Grill. For those of you that actually care about all things New Mexican (hi Max!), the family that runs the place (and I mean literally—I think everyone from the line cooks to the bartenders to the waitresses to the little kids running around the dining room is related here) is originally from Albuquerque and they take their chile seriously. They even sell roasted green chile from Hatch, New Mexico in the fall (a great stopgap if you can’t make it south for the real Hatch Chile Days).  Perhaps even more impressive than their pork green chile is their amazing vegetarian red chile, the likes of which you don’t find ever often in Denver (or many places outside of New Mexico and Arizona and my extended family’s kitchens, for that matter). And if you think I’m talking about chili con carne, as in tomato and bean-based TexMex soup, get your shit together and book a plane ticket to Albuquerque. Seriously!  I’ll tell you where to eat.

But if you are a genuine chile-head in Denver, Jack n’ Grill is just about the best thing ever. Their gigantic burritos are something to behold, and you can always order things “Christmas” (as in, half green, half red chile). Even Clarence is out of his league when confronted with a Jack n’ Grill burrito, which my father lovingly describes as a “feeder.”  As in, this burrito will feed you tonight, tomorrow morning, and maybe a snack tomorrow afternoon.

My personal favorite is the chile relleno burrito ($9):  two egg battered chile rellenos (wonton wrappers are for American Chinese restaurants and American Chinese restaurants alone, people) and refried beans wrapped in a giant flour tortilla and smothered with chile and cheese. Blasphemous as this may sound (believe me, I know!), it is just about the yummiest thing ever.  If the idea of making chile rellenos into a burrito makes you squeamish (I understand), go ahead and order the chile relleno plate ($11) and the burrito fixings will be replaced with pinto beans, calabacitas (roasted squash and peppers), and rice.  Look at me accommodating vegetarians on my site! You never thought you’d see the day, did you? 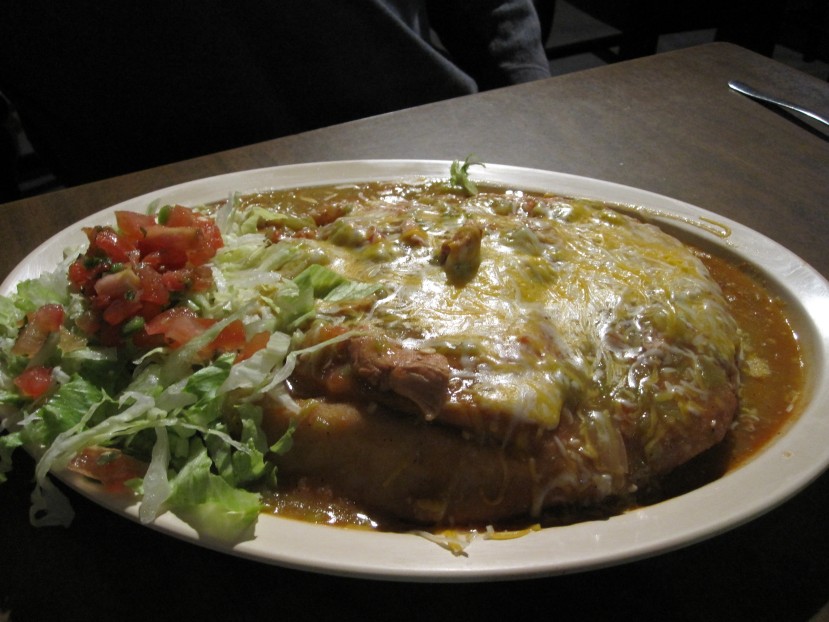 Or, if you are feeling a bit more carnivorous (always), grab the carne adovada plate ($12). Pork loin, slow-cooked in the house red chile until it is basically falling-apart tender, is served with fried potatoes, pinto beans, and rice. Or, order carne adovada in almost any other iteration – in a burrito, some tacos, or (my personal favorite) in a stuffed sopapilla ($11).  That’s right – imagine red chile-braised meat and pinto beans stuffed into a sopapilla that is then deep-fried and smothered in chile and cheese.  Rib-sticking, holy-shit goodness.  If that looks a little too indecent for you (go home!), you can also order a variety of gorditas, which are basically tiny sopapillas stuffed with the filling of your choice and served with chile for dipping.  My mama likes to do this for lunch, saving two for a tidy little take-out dinner.  I usually veer for the enormous feeder plates that make from some pretty excellent (if aesthetically unappealing) leftovers. Don’t worry, we always scrawl our names into the styrofoam carry-out containers so there is no confusion about whose is whose.  Hell hath no fury as this gal if anyone touches my leftover stuffed sopapilla.  For serious.

Jack n’ Grill hamburgers—legendary in their own right and lovingly named after members of the family whose photographs adorn the menus—are enormous and pretty life-altering if hamburgers are your thing.  I especially like the Anna burger ($8), a 10 ounce beef patty served on a (wait for it!) sopapilla with green chile and cheese. I dare you to eat more than half. Or, order a Jaxx burger ($8), served on a bun with guacamole, sour cream, bacon, green chile, and cheese.  Life doesn’t get much better than guacamole and bacon together.  Add some green chile and my brain just exploded.  Jack n’ Grill’s breakfasts (served all day, YES!) are also killer.  Huevos rancheros ($7) with that red chile! Smothered breakfast burritos ($8) stuffed with eggs, ham, fried potatoes, green chiles, and onions! How could you start the day any better?

All of this can be washed down with some of the biggest and most seriously delicious margaritas in Denver. Anyone still going to the Rio Grande downtown for such things deserves everything that comes to them in LoDo on a Friday night, which has officially become the urban planning equivalent of date rape.

Moreover, like I said before, not only is this a family-run place, but it’s owned by quite possibly the nicest family in the world. There does seem to me something distinctly American about this warm, relaxed, and totally democratic kind of restaurant, where waitresses call you sweetie and their kids play outside the kitchen.  I’ve missed this sort of thing, and can’t seem to get enough of it when I’m visiting my hometown. If you find yourself in Denver, please make this your must-eat. Your margarita is on me.