I recently met up with my friend K in the city of Westminster, where she had been storing her belongings for several years while she was living in Tokyo. Yes, I totally just said that as if that is a completely normal, not absurdly fabulous way to spend a few years. Do we want K to teach us all about Japanese food, dear reader? I think so! If nothing else, I do think that she should be our guide for a Los Angeles ramen Hungerdome, yes? Let’s relentlessly pester her until this happens, Bear-Gardeners.

I can’t recommend Westminster’s self-storage facilities, as poor K’s space was vandalized during her time away. Clarence and I can, however, recommend Westminster for eating. Among the OC’s many attributes is one of the largest (the largest?) Vietnamese communities outside of Vietnam. Westminster boasts some staggeringly good Vietnamese food, though I’ve yet to find the bánh mì of my dreams. Don’t worry, I’m looking, but in the meantime, my heart remains true to this place. 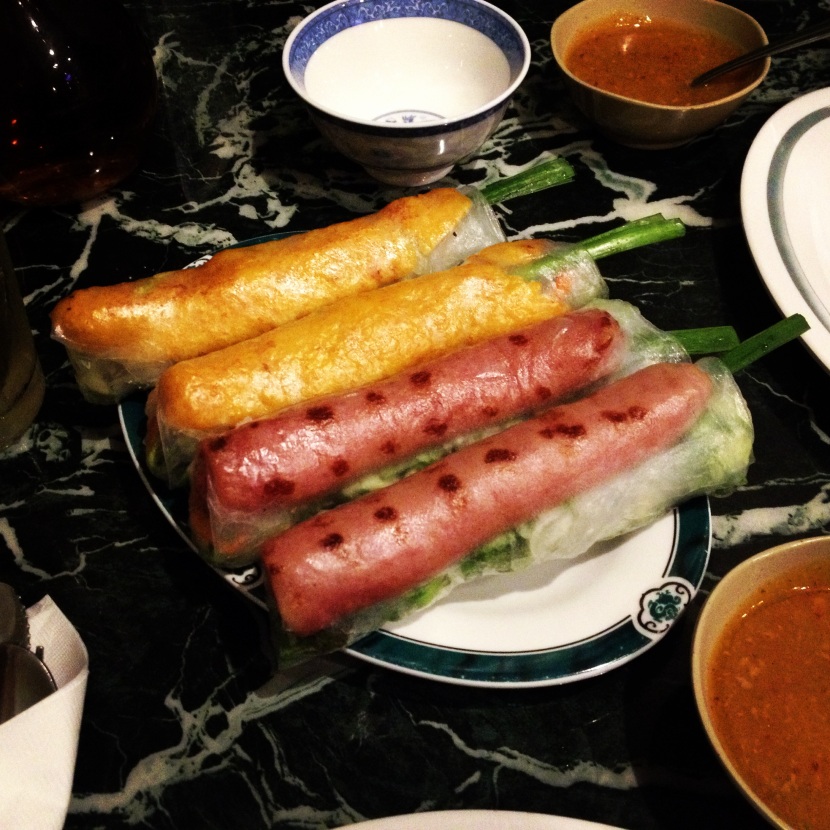 We met for lunch at a place called Dat Thanh, which is a completely wonderful, family-run spot. The friendly son runs the front room, and his parents cook in back. We started off with Vietnamese iced coffees (natch), which were so delicious that we were actually warned to take our time or suffer a too-quick caffeine buzz. We started with an order of nem nuong cuon thu duc (pork sausage spring rolls) that were just the right mix of crunchy bits, pressed meat, and fresh herbs. The real standout in my opinion, however, are Dat Thanh’s broken rice dishes. K and I shared a tom nuong & ga nuong (BBQ chicken and shrimp), a positively revelatory combination of charbroiled meat and fish on some of the most addictive rice I’ve ever tasted. Neophytes that we were, the owner instructed us to mix chile paste with a sweetened, reduced fish sauce in small bowls, then pour it over the whole dish. One of the things I like best about K is that she immediately said that she wished we had gotten our own plates and not shared, which is basically how Clarence feels about everything. And at a door-busting seven bucks for the entire plate, I certainly won’t be sharing again.

Nota bene, Dat Thanh is cash only, and the owner emphasized that it really is a family-run business, so don’t be coming in at five minutes until closing and expect to sit down for an hour. The place is such a gem, and I’m literally counting the minutes until I can get back for my own plate of com tam hay bun.