After our hike to the Îles Sanguinaires, we boarded a bus headed inland to a town called Sartène. All of our copious research indicated that one really ought to have a car should one want to tour Corsica outside of the major tourist destinations. Pshaw, we said. We could really only afford a rental car on one island and Sardinia had won the coin toss. So we were stuck with public transportation, which at least from the outside seemed to be much more comprehensive in Corsica than Sardinia.

I suppose you know where this story ends up.

We arrived in the glorious hill town of Sartène after a beautiful, if nauseating, bus ride where we watched two too-cool-for-school Corsican teenagers flirt with one another the entire time. We practically heckled the guy to ask the girl for her number when he had reached his stop. He didn’t, of course. Teenagers. Our bus driver had been kind enough to ask us where we were staying, and seemed impressed by the location of our hotel (the only one I could find with any vacancies on the internet). He dropped us off at the bottom of a hill and told us it was only a short hike up a steep grade to get to our lodgings.

It was at this point that we realized that our grand scheme of renting bikes to tour the local archeological sites and beaches was probably not going to work out, as I could barely drag my suitcase (carry-on regulation size!) up that damn hill. And it appears that all the hills looked just like that one. We checked into the lovely Hotel San Damianu (Quartier St. Damien – BP3 – F – is it just me, or does that not really resemble an address?!), whose rooms all possess dreamy views of the valley and whose pool is a sparkling (if unheated) jewel in their beautiful garden. While the proprietress is lovely and vivacious, her husband is a crusty old crab who apparently hates Americans, even the polite ones who speak French and wax poetic about his beautiful hotel and town. I’m nit-picking here, as we had a really lovely stay there. 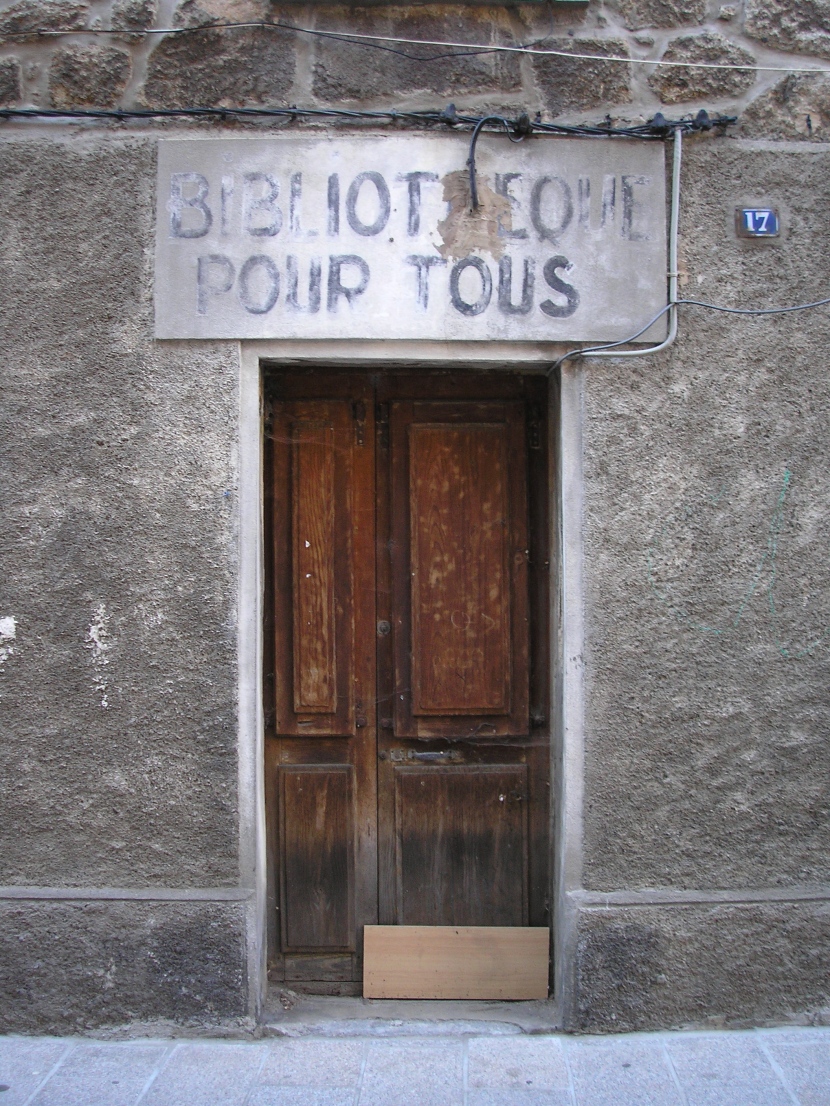 After a quick swim and a thorough inspection of my growing collection of mosquito bites (sexy!), we decided to explore the town of Sartène. Our Lonely Planet guidebook had called Sartène a “mysterious medieval village,” the “most Corsican of all Corsican towns,” situated in an area whose people are “more inward looking, more secretive, adamantly steeped in tradition.” I’ll decode this for you: people aren’t especially nice there. With some exceptions, of course. Sartène is in that unfortunate stage of development as a destination where the local economy is dependent upon tourism, but nobody is getting rich off of it. So everyone in town seems to resent the presence of outsiders, but they are also forced to cater to them. We were frustrated, I guess, because we probably imagine ourselves to be those most laughably unrealistic “unintrusive tourists,” you know, the ones who attempt to speak the language, steep themselves in local culture, eat the maggot cheese, etc. 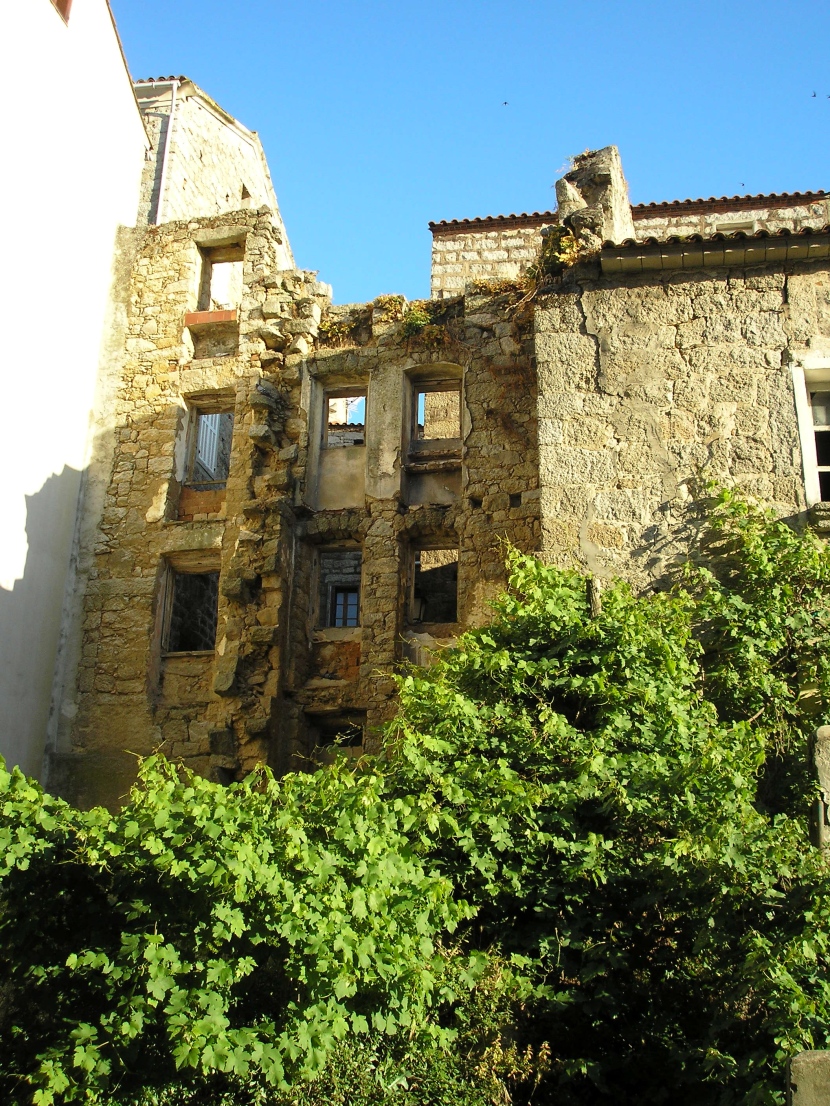 After wandering the admittedly beautiful narrow streets of Sartène for a few hours and procuring me some entirely worthless anti-itch cream, we stumbled on Le jardin de l’échauguette (Place de la Vardiola), a beautiful restaurant with a large outdoor patio with great views. We had a flat-out epic meal accompanied by a bottle of Sartènais red from the Domaine de San Michele (did I mention that we drank an Ajaccian rosé in Ajaccio?  No?  We did. Aren’t we just puke-worthy bougie?).  For our first course, we split a bountiful assiette corse filled with local charcuterie, cheeses, olives, and a killer terrine flavored with myrtle, which grows in great abundance in Corsica and is a significant part of the flavor palate of the cuisine. B had a rack of lamb that he now describes as his Ur-Lamb. It was pretty amazing. I had another round of daube de veau (veal stew) served with yummy polenta. Best of all, we split another Corsican specialty for dessert, the Brocciu-based fiadone, a cheesecake-like dish made with the cheese, eggs, and a hint of lemon. The wine was perfect with our meal – we got our first real taste of the French notion of terroir, that is, the idea that the geography of a particular place infuses itself in the food that is produced there. Drinking a Sartènais wine while eating a Sartènais terrine brings out whole facets of the bouquet that you might not otherwise recognize, in this case, the strong flavor of myrtle. While I’m skeptical of upper-class “locavore” snobbery, I do think this kind of resonance is what Alice Waters has been ranting about for all these years.

There aren’t any pictures of that meal. Why? I have no idea. I suspect that the reason might be that we had quickly discovered that there was not much else to do in town besides get drunk, so we did, and had an amusing stagger back to our hilltop-perched dwellings. We awoke a bit hungover but psyched to see our amazing view.  We went into town still clinging to the idea that we could rent bikes or figure out public transportation to the major archeological sites of Corsica. We were aggravated to discover that it is essentially impossible to visit Cauria, the home of three megalithic sites filled with menhirs and dolmens, without a private car. I don’t care very much about such things, but if there was one thing about B that I discovered on this trip is that there is nothing this boy likes more than piles of old rocks.  Well, actually, these are the things he likes best:

1)    Rocks, especially big ones, piled on top of one another by human hands, a long time ago.

3)    Coming up with vaguely crackpot theories about the function of said piles of old rocks in prehistoric times.

4)    Climbing on said piles of old rocks like a feral child.

5)    Jumping off said piles of old rocks, preferably into the sea.

For brevity in future entries about our trip, I will refer to our various “pile of old rocks” adventures using this handy numerical system. Sartène was a wicked disappointment for B because he didn’t get to experience any of the above listed primal joys. We asked the “tourist office” if there was a place we could rent bikes to visit Cauria and the supposedly dreamy Tizzano beach, but the woman laughed at the idea. I tried to soothe him with a visit to The Museum of the Prehistory (their English, not mine). It worked for me – the museum was airconditioned and I was cranky and itchy from the ever-increasing constellation of mosquito bites that now covered both of my legs. B got to exercise a bit of number 3 in the museum, arguing that the archeologists who had curated the exhibition had placed the beginning of the Bronze Age far too late in the chronology. I resisted the urge to make snoring noises. I figured that since he had listened to me kvetch about my itchy legs for 48 hours or so, it was the least I could do. Relationships are about give and take, people. We both got to experience the lovely view from the museum, which is by far the poshest place in town. 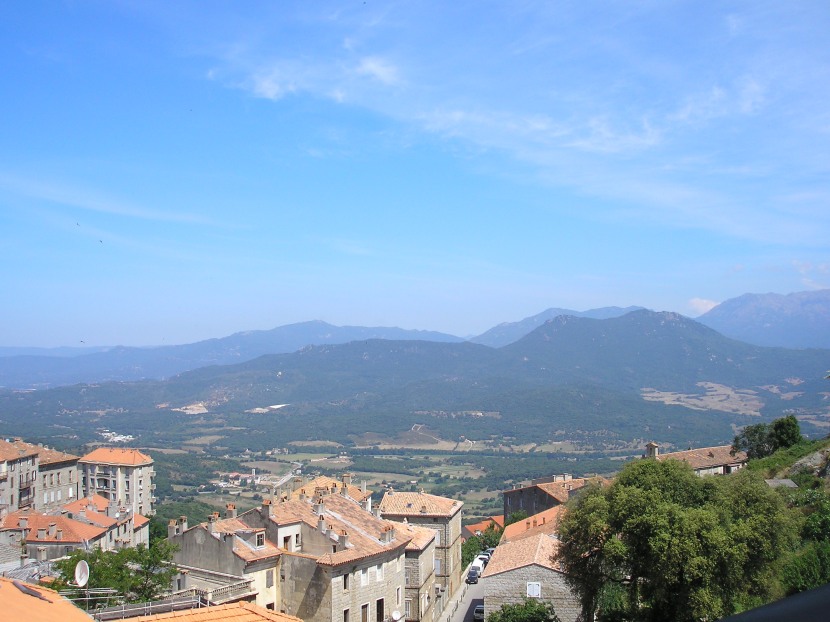 By midafternoon, we were totally out of attractions in Sartène and still had a few hours to kill before the bus to Bonifaccio arrived. We had a totally dissatisfying lunch cobbled together from a local deli consisting of a chestnut terrine (yucky and the consistency of catfood), a charcuterie plate, and cannelloni au Brocciu. At this point, we realized that cured meats were the likely culprits for our gastrointestinal distress and that we needed to lay off the lonzu for a little while. We also realized that there was little left to do in the heat besides get a cold beer, so we settled in at Idéal Bar (8 Place de la Liberation) on the main square in town. While it’s a pretty run-of-the-mill bar (with decidedly extraordinary spicy olives that they liberally distribute with drinks), it’s worth a shout-out for two reasons. Number one, the bartender/server was the first genuinely friendly person we met in Sartène.  Number two, I was able to sample my second type Corsican beer:

Colomba is an easy-to-drink blonde that is infused ever-so-subtlety with myrtle. It’s good, but not Pietra good. It’s worth a try, however, especially if you like a good blonde. That’s what she said, right?

Next stop: We get to work in Bonifacio eating cephalapods of all shapes and sizes!