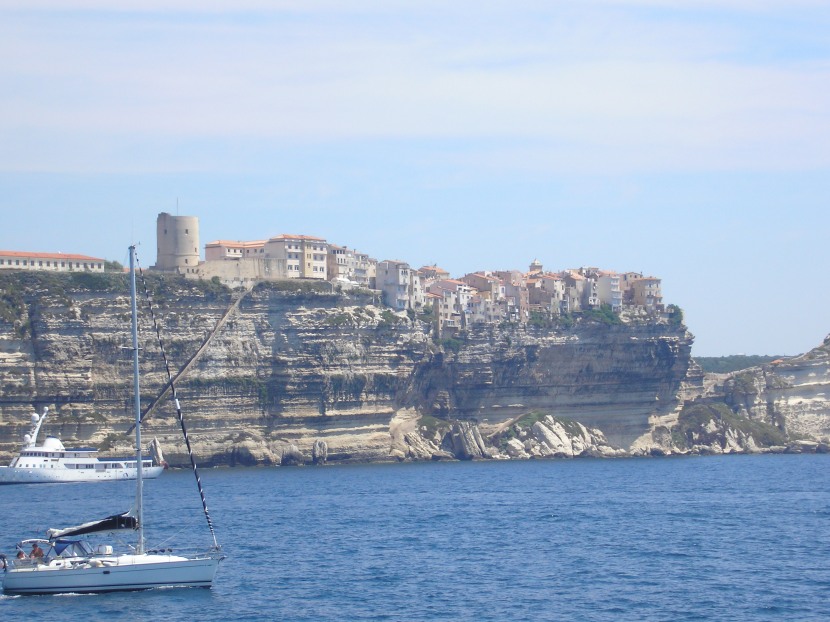 When we arrived in Bonifacio I was hot, tired, and totally carsick. I had also scratched myself until I bled on the bus ride. Corsican mosquitoes do not fuck around, people. I was also annoyed about the aesthetic trajectory of our trip, one in which I was looking increasingly bloated and blotchy while B was increasingly blond, tan, and dreamy.  Between my sucrée blood and his enviable metabolism, I was starting to feel like I wasn’t quite punching my weight in our relationship looks-wise. I had also begun to realize that the vacation-binge, all-charcuterie-all-the-time, food philosophy I’d been indulging wasn’t doing me any favors in the stomach department. Bonifacio didn’t look like much more than a tourist trap from our hotel, which was conveniently located on the marina. Cross and sweaty, I decided to stop eating salami for a while and take a nap at our hotel while B went out to buy cigarettes and explore. 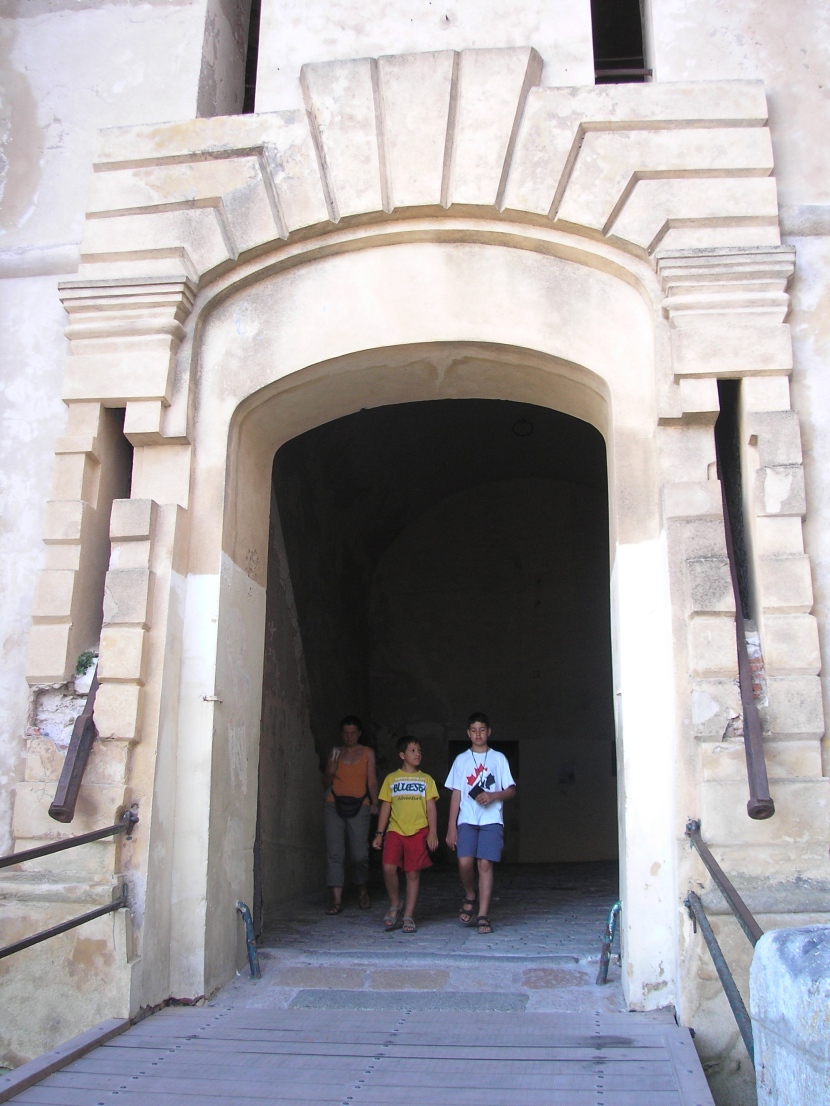 He came back giddy with medievalist glee. “You have to climb up a steep cobblestone street to get to the old town and cross a moat to enter through a fortified castle gate! There’s a DRAWBRIDGE!” While I sensed that I was witnessing my boyfriend regress to a decidedly less-dreamy phase of his development that involved more Dungeons & Dragons than romantic island vacations with girls, I was also intrigued.  Drawbridges are sweet! So I puked and rallied (metaphorically), got dressed, and we headed into town. I was clutching, of course, a list of restaurants I wanted to try. 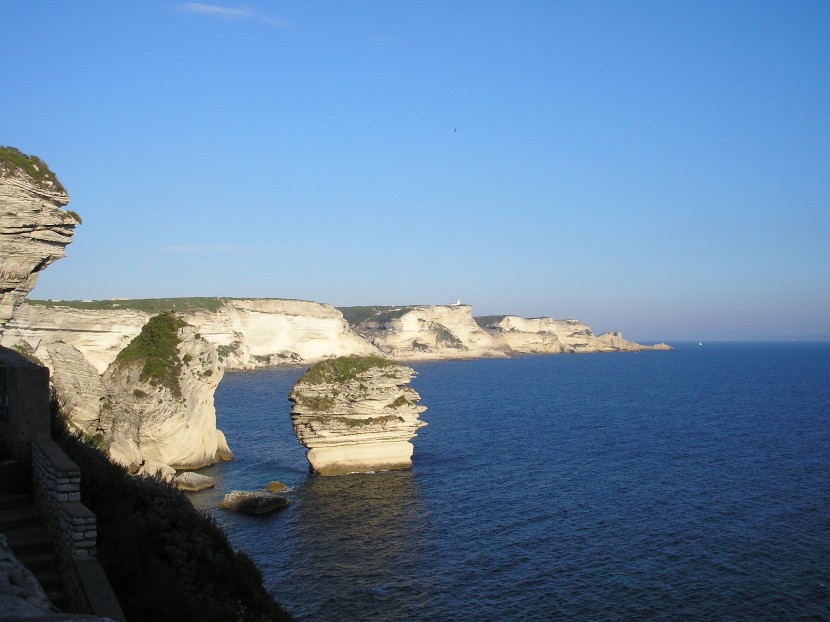 The original town of Bonifacio, which you reach by climbing either sets of stairs or a steep cobblestone path out of the marina strip that is lined with Eurotrash bars and wealthy yacht-owners, is a walled medieval town with narrow, cobblestone-lined streets and breathtaking views of the surrounding coastline.  My mood immediately lifted with the views on the way up the hill. We explored the town for a while, which is chockablock with interesting little antique and souvenir shops, buttress-topped alleyways, and yummy smelling restaurants. I already had my eye on L’Archivolto (2 Rue Archivolto) from its glowing review in our Lonely Planet, but a walk-by this adorable antique shop and restaurant cinched the deal. B went in to see if we needed reservations and came out confused after having the restaurant’s Byzantine reservation policy inconclusively explained to him by the owners. “I think we are just supposed to come back around eight and hope for the best,” he said, puzzled. 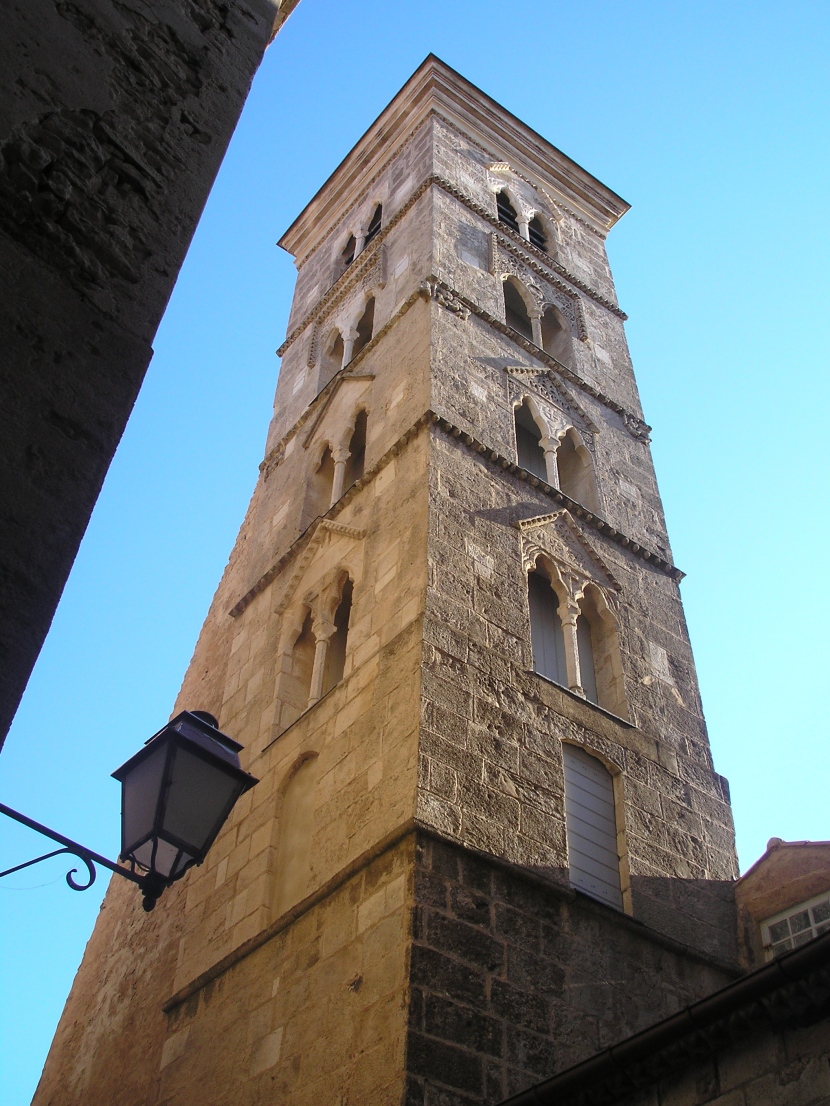 With time to kill, we wandered outside of the town center in search of a cluster of Genoese towers that we had seen on the bus ride from Sartène. Genoese towers make for lots of good phallus jokes, people. Instead, we ended up wandering into an abandoned military zone filled with revealing graffiti: 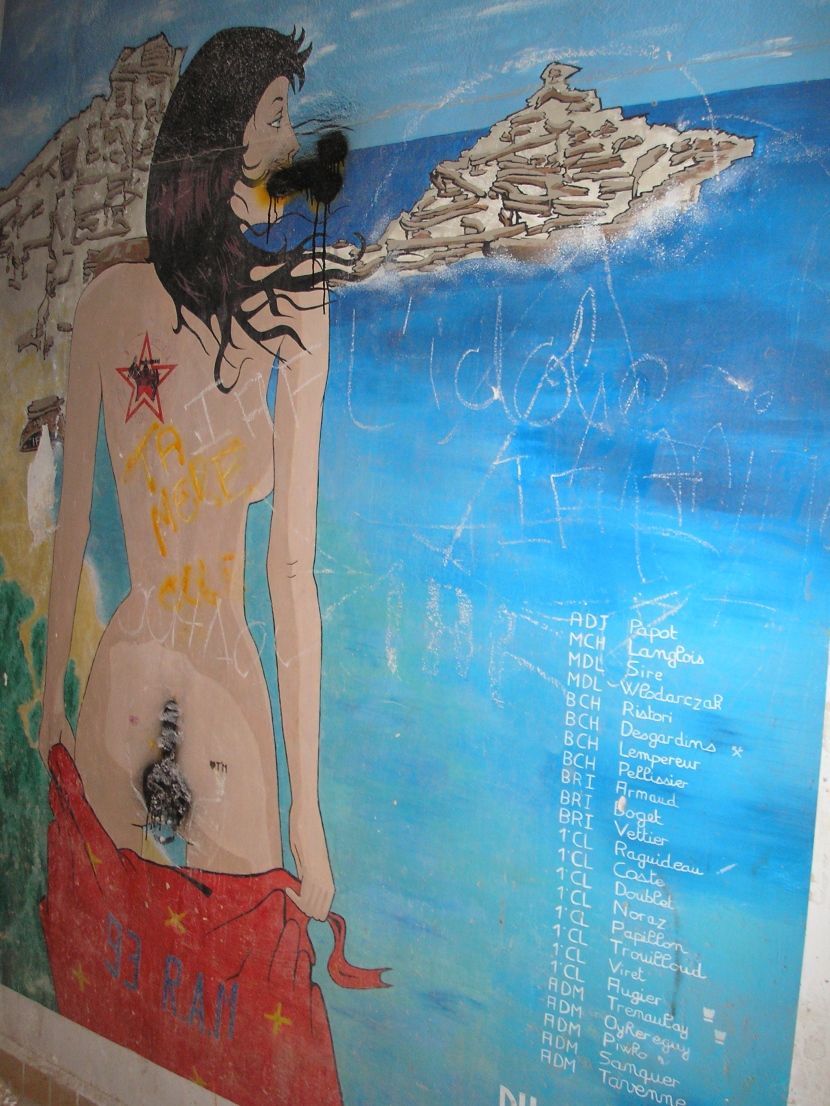 The mess hall was filled with murals for the various brigades that were stationed in Bonifacio: 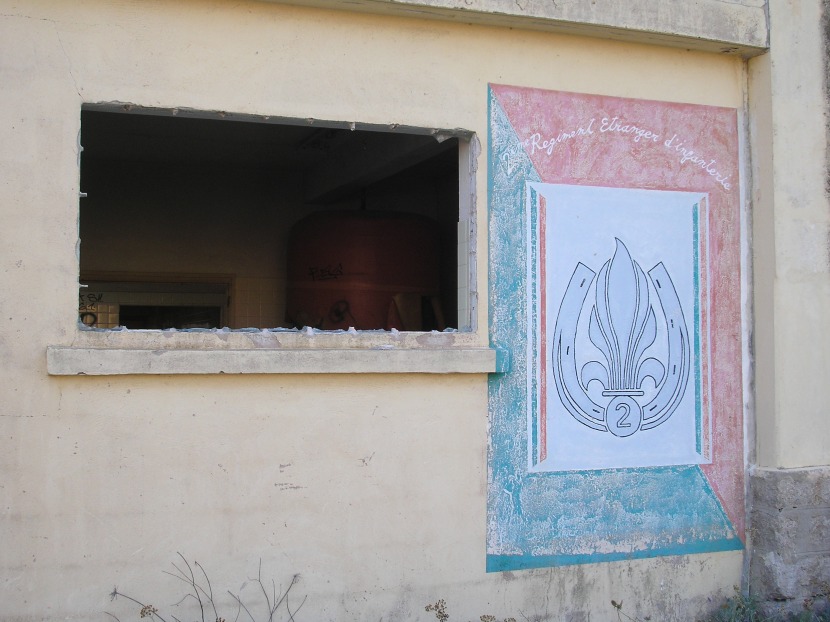 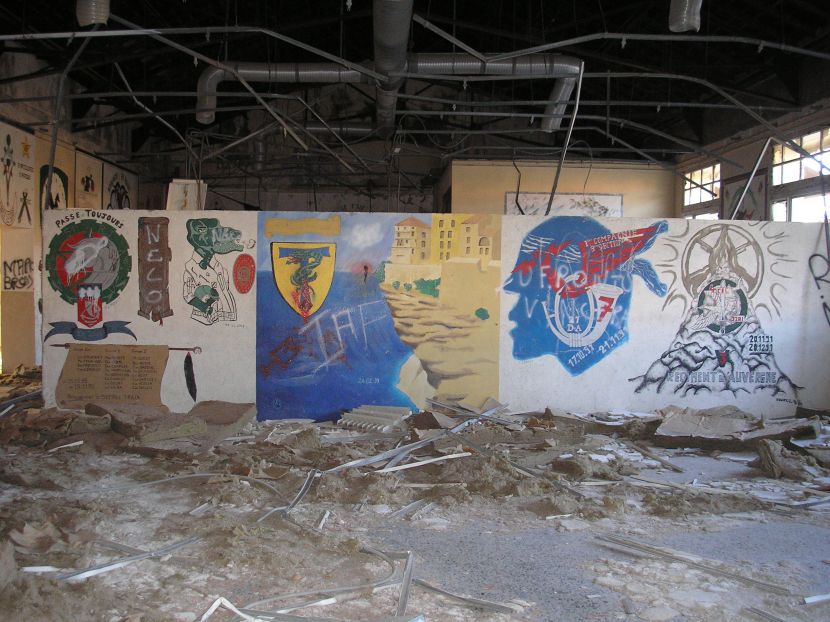 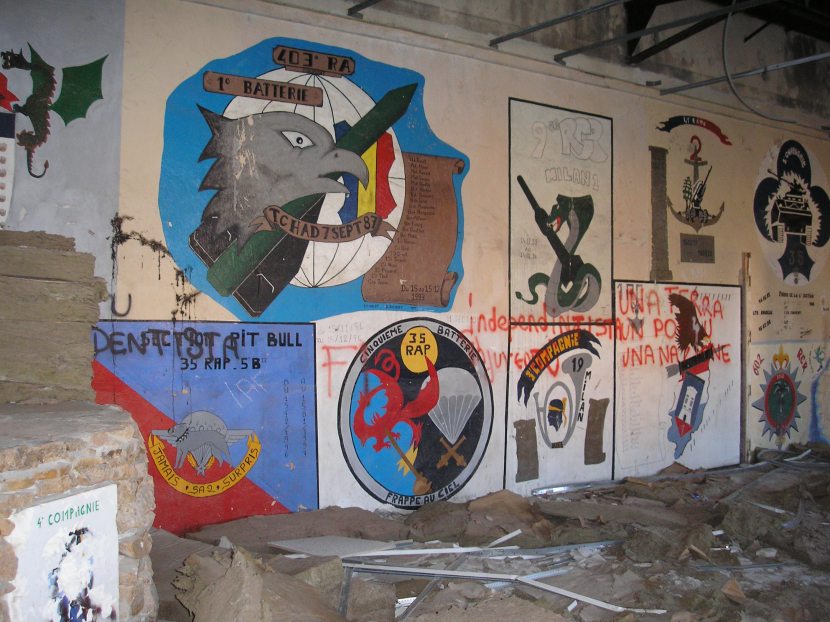 I, little Sally Rule Follower (“What if this is trespassing? What if there is aesbestos? What if my mom finds out?!”) was of course skittish about exploring, but even I have to admit that it was pretty awesome to stumble into this abandoned mill: 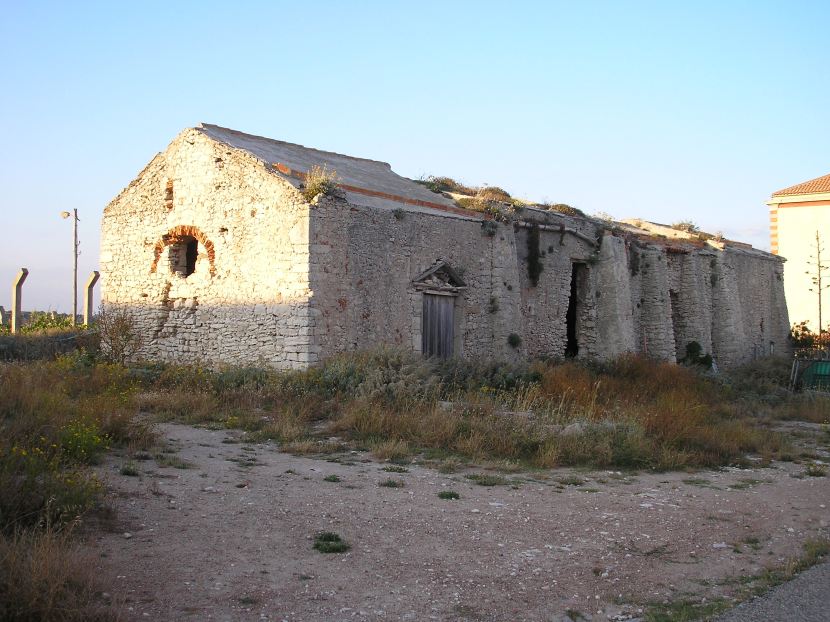 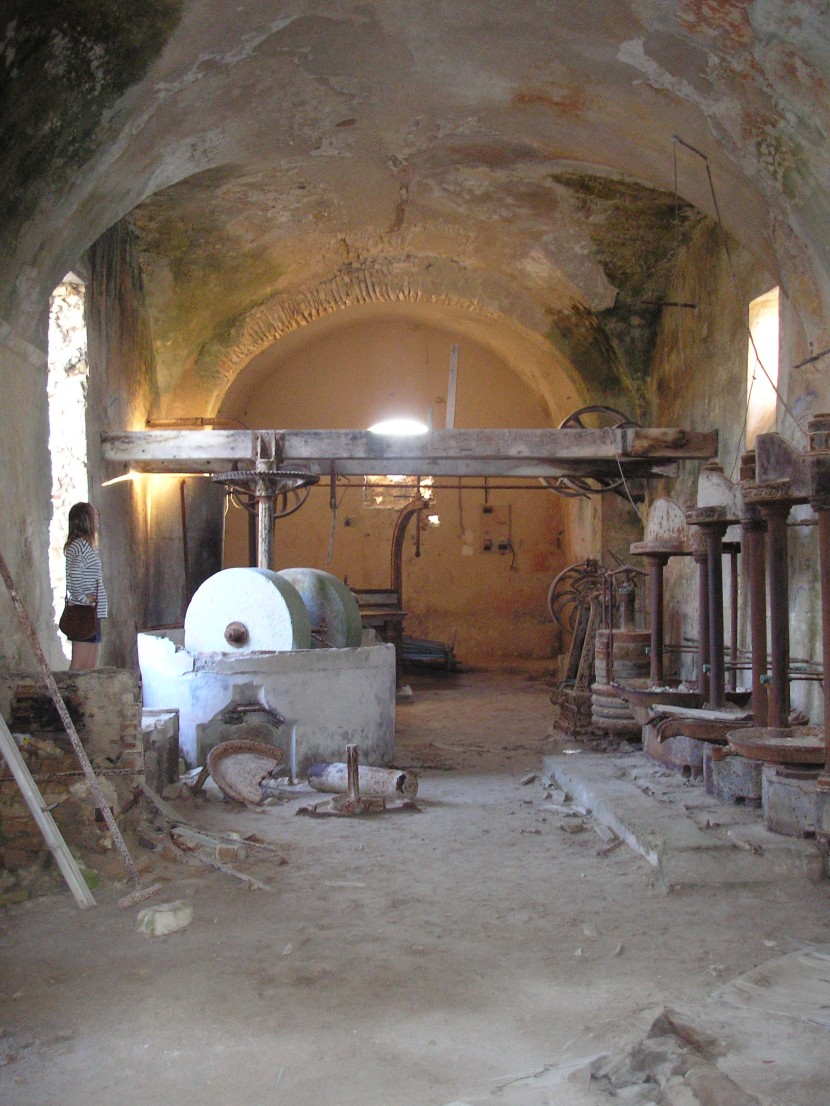 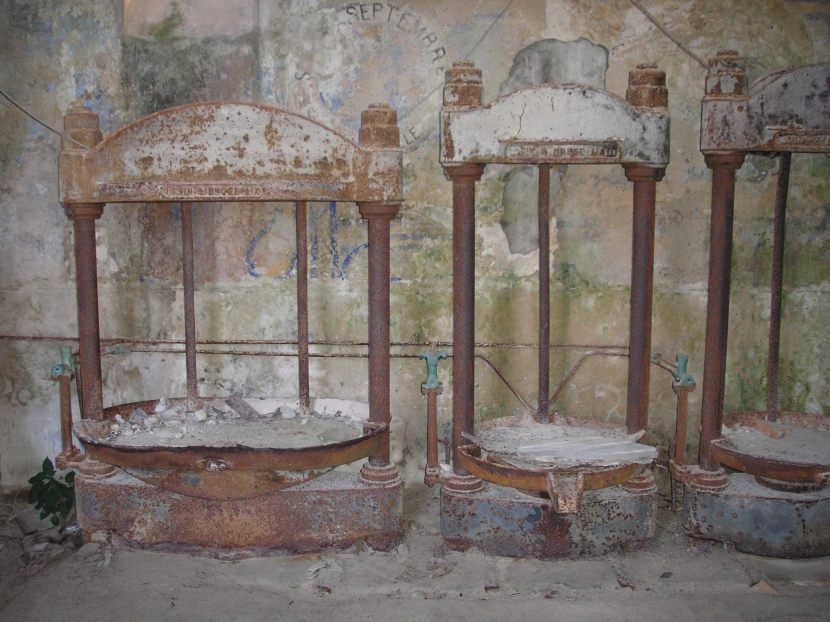 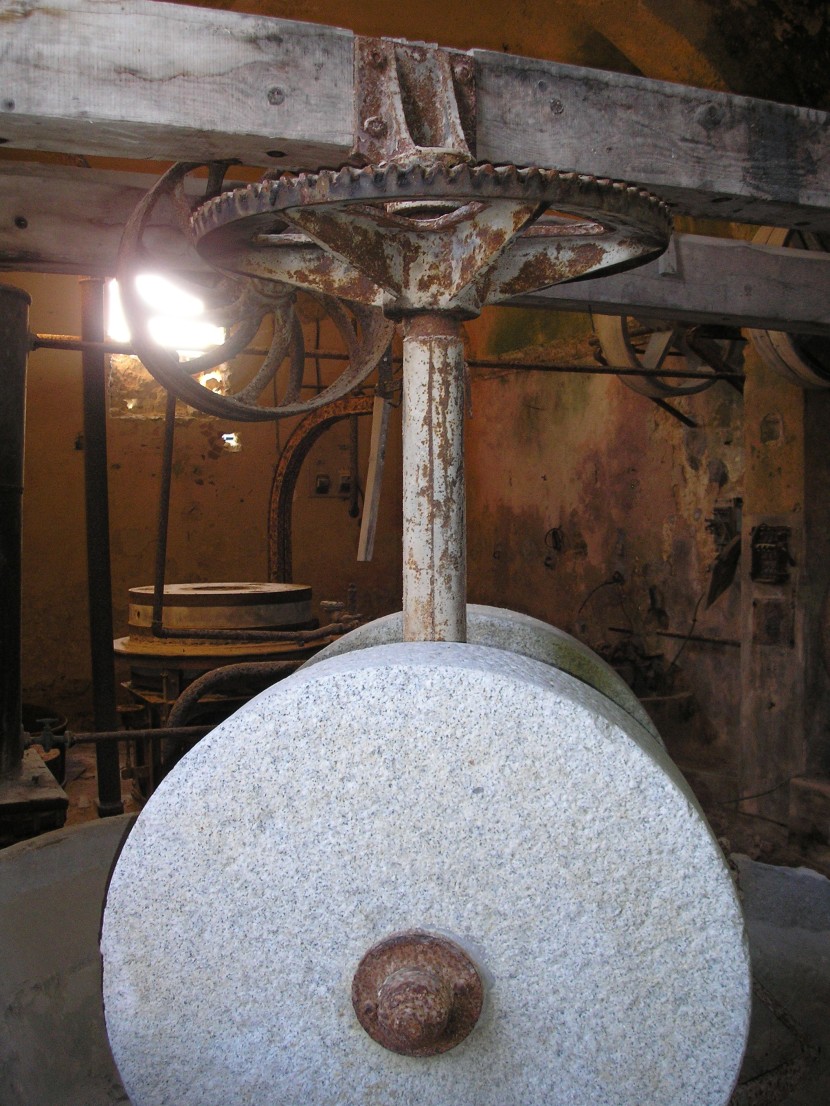 B could have explored all night, but it was getting close to the time of our non-reservation, so I insisted that we move on. We arrived at L’Archivolto and found it packed, a rope having been tied on the front entrance as if to say “Too late, you sorry stragglers.” After a bit of coaxing, we managed to get in for a place at the community table, which we shared with a lovely Parisian couple. Seeing us struggle with a couple of the different fish names on the menu, the woman we were sharing our table with provided some recommendations. Apparently, they had eaten at L’Archivolto three times that week, which I took as a very promising sign.  And whoa, ho ho: 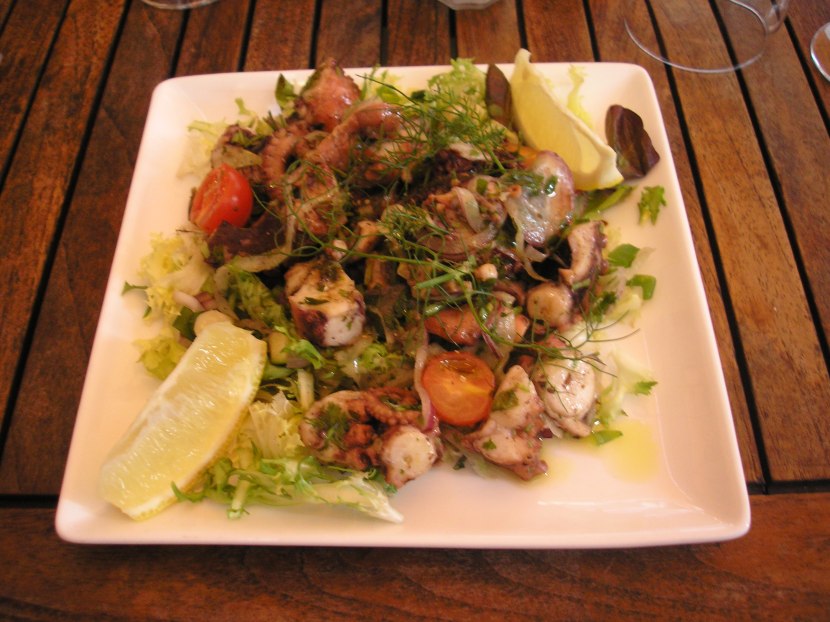 Our first plate was this cold octopus salad with cilantro. We were initially going to split one, but then our table companions received theirs and Clarence declared that he would cut anyone who asked him to share. This, people, was the most perfect salad I’ve ever eaten. Tender, sweet octopus, fresh cilantro, an assortment of wild greens, and super-sweet local cherry tomatoes, dressed with nothing more than some good olive oil and squeeze of lemon. What a revelation. 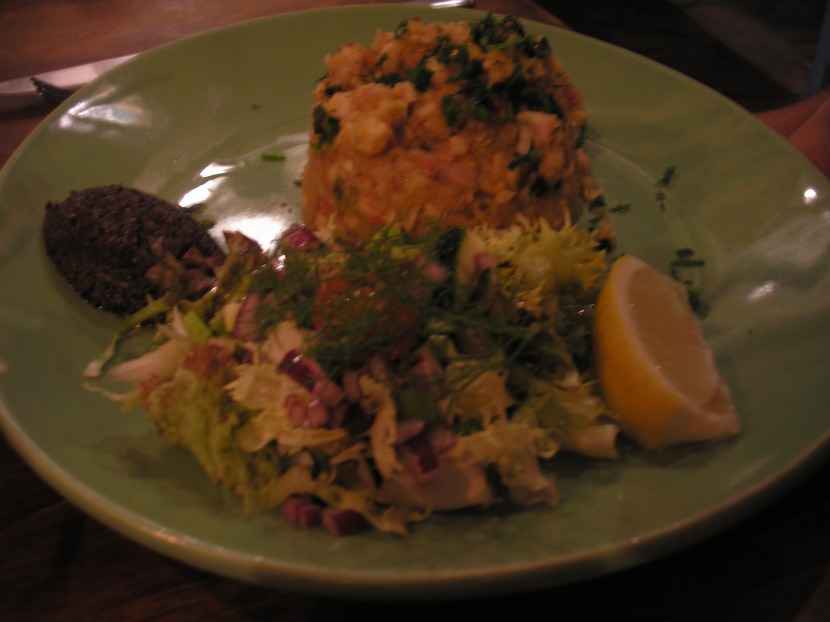 B’s second plate was a mysterious red mullet and fennel preparation that resembled a kind of warm tartare, or as B put it, “the insides of the very best crabcake I’ve ever eaten.” There was, certainly, a lot of crab in this rouget dish. It was served with a heavenly black olive tapenade that attracted a lot of attention from my roving fork (I may or may not have eventually gotten my hand slapped for excessive trespassing). 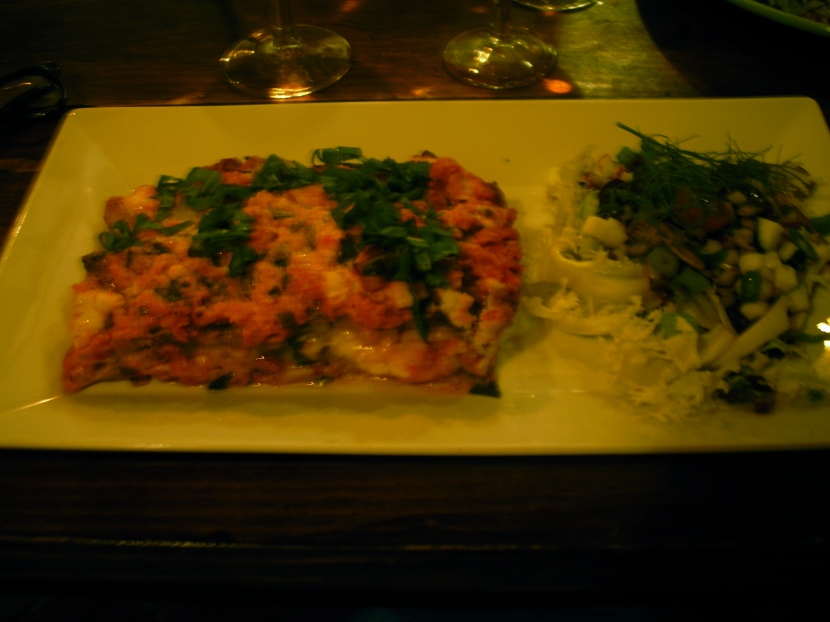 It was especially ridiculous that I couldn’t keep my hands to myself, especially since I was occupied with the best lasagna I’ve ever eaten or could possibly hope to eat.  A bit of a riff on the local specialty of aubergines à la bonifacienne, L’Archivolto serves up a serious slab of their impossibly perfect eggplant and goat cheese lasagna.  This picture sucks, but omg this was “call in the troops, I could be a vegetarian if I could eat this everyday” kind of food. 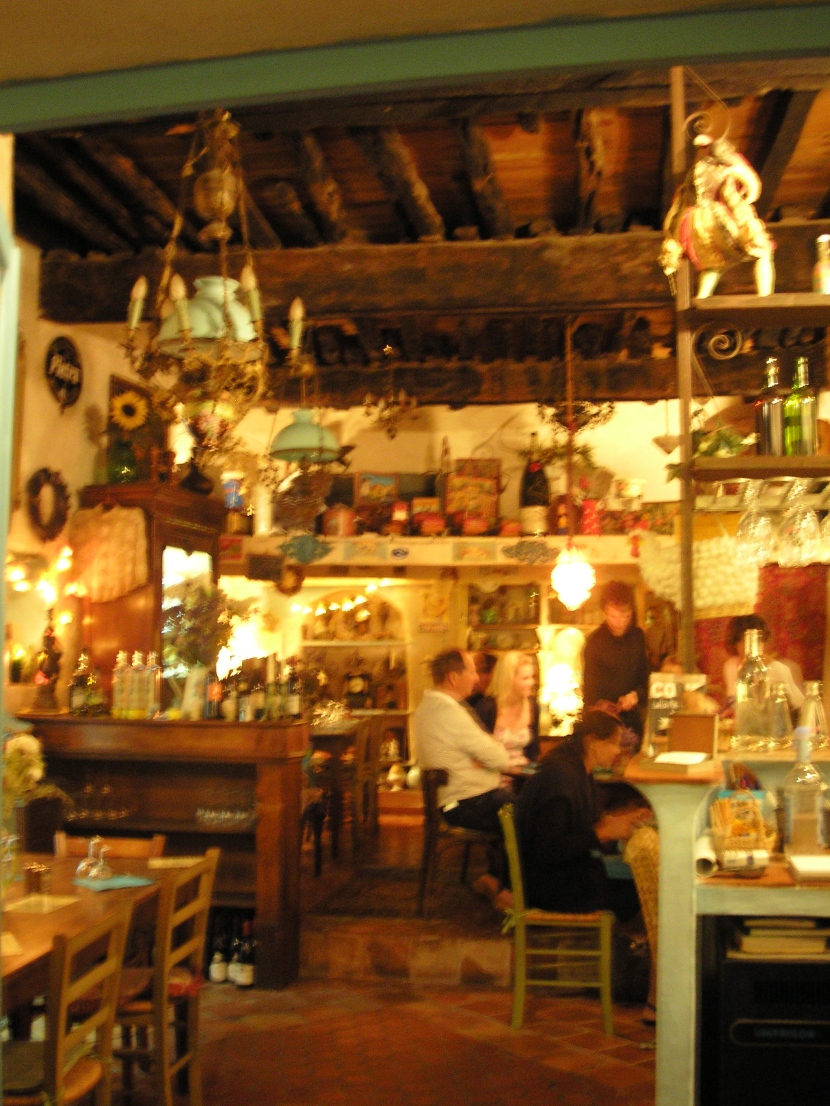 We wanted dessert, but were both uncomfortably full at that point. Instead we had a lovely conversation with our tablemates, who made sitting at the community table a delight.  In this particular feature, L’Archivolto reminds me a great deal of my favorite restaurant in the world, Café Pasquals of Santa Fe, New Mexico. Both restaurants have an eclectic, homey design that reminds me of my Montessori teacher’s house when I was growing up. Both have a large community table that encourages visitors to mingle and chat with one another. And both use local products and elements of the regional cuisine while adding sophisticated techniques and flavors from around the world. They are both, in my humble opinion, exactly what a great restaurant is supposed to be, and while they are both pricey, I’d rather spend my money at a places like these than a fussy, white-tablecloth, honeydew-gelée and sunchoke-foam joint any day of the week.

Wandering down the hill to our hotel, we decided that full or not, we couldn’t neglect B’s Reign of Gelato (requiring that we eat gelato every single day of our trip).  We stopped in at the marina Glaces et sorbets à Bonifacio (Rocca Serra) (17 quai Comparetti), a gelato shop with a staggeringly large counter, friendly staff, and a cool selection of local flavors.  We shared a cup of sorbet made with locally-grown, organic clementine and lemons.  The following day, B braved a scoop of myrtle (which he liked – I thought it tasted like cold medicine and mouthwash) and I got a final Brocciu fix.  It’s definitely worth a stop. 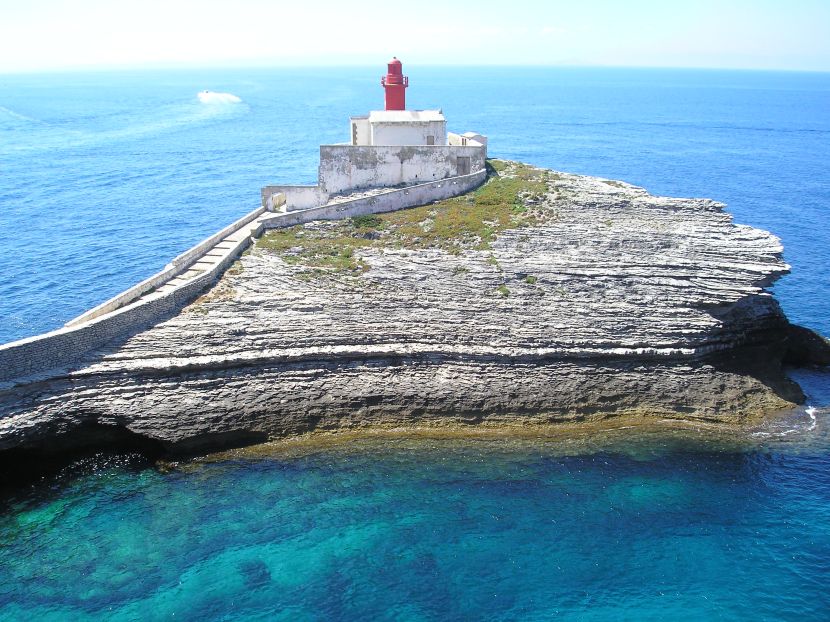 We spent most of our second day in Bonifacio hiking to Paraguan beach, which I’d also really recommend if you find yourself in Bonifacio. We weren’t in high tourism season yet, but town was definitely crowded, so we expected that our hiking trail would be full of other tourists. Instead, we were treated to three hours of exquisite coastline views, caves, calanques, and lighthouses without meeting a single other person. We ended sharing the white sand Paraguan beach with just a handful of other people. It was pretty heavenly to jump in the sparkling turquoise water after a long and sweaty hike. I don’t know if European tourists are particularly lazy, or what the deal is, but we continued to have hiking trails and limited-access beaches essentially to ourselves for the duration of the trip. 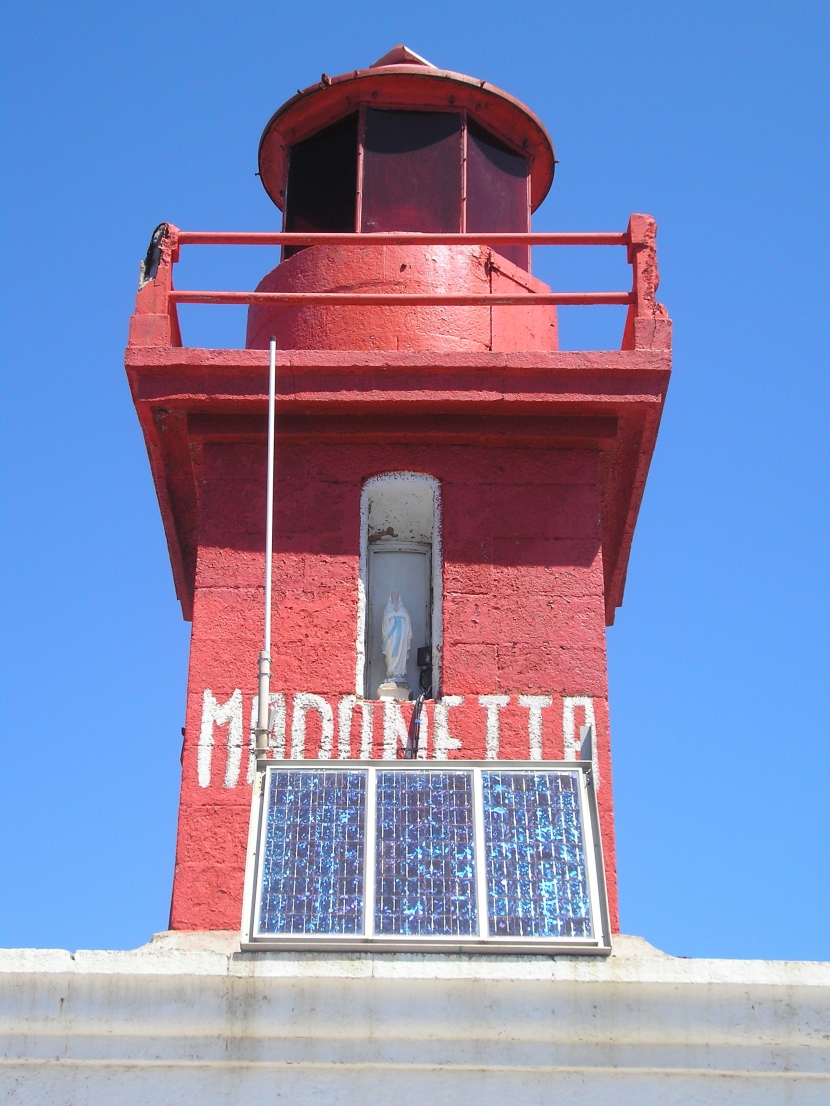 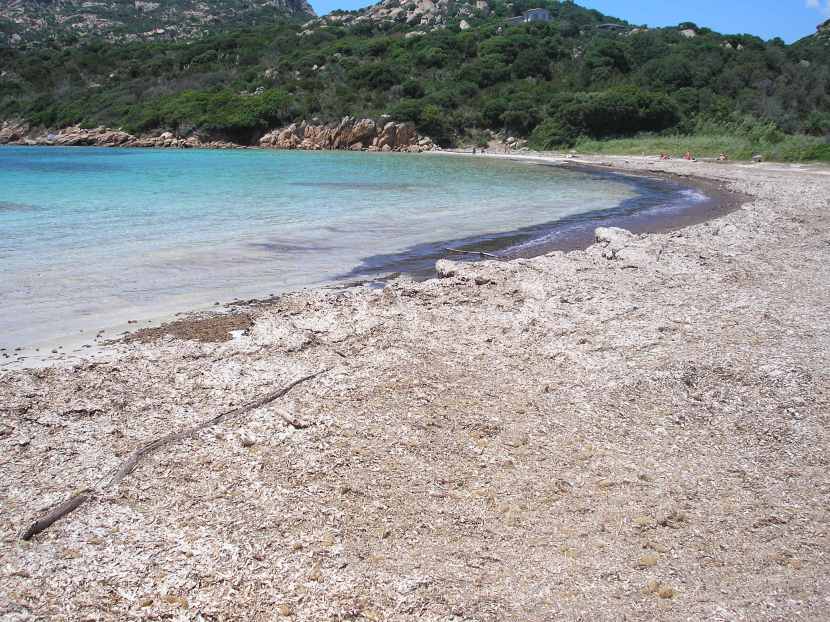 When dinnertime rolled around again, we pretended for a minute that we might want to go somewhere else besides L’Archivolto, but quickly laughed off such a folly and began fantasizing about what we were going to eat that evening. Our repeat visit landed us a coveted table on the terrace, and we got to work.

While I couldn’t bear to order a different entrée and indulged myself with yet another octopus salad, B ordered the house rabbit terrine for his first course, served with a chutney of apples and quince.  It was exquisite: 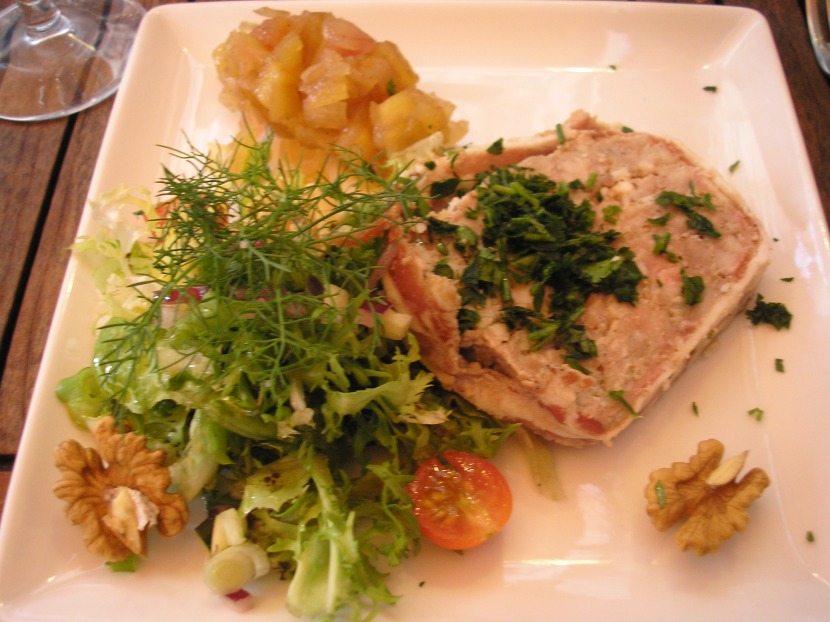 My second course consisted of locally-caught and roasted supions (tiny calamari), potatoes, and tomatoes. Each squid was perfectly sweet, tender, and released a kind of aromatic seawater when I bit into them. 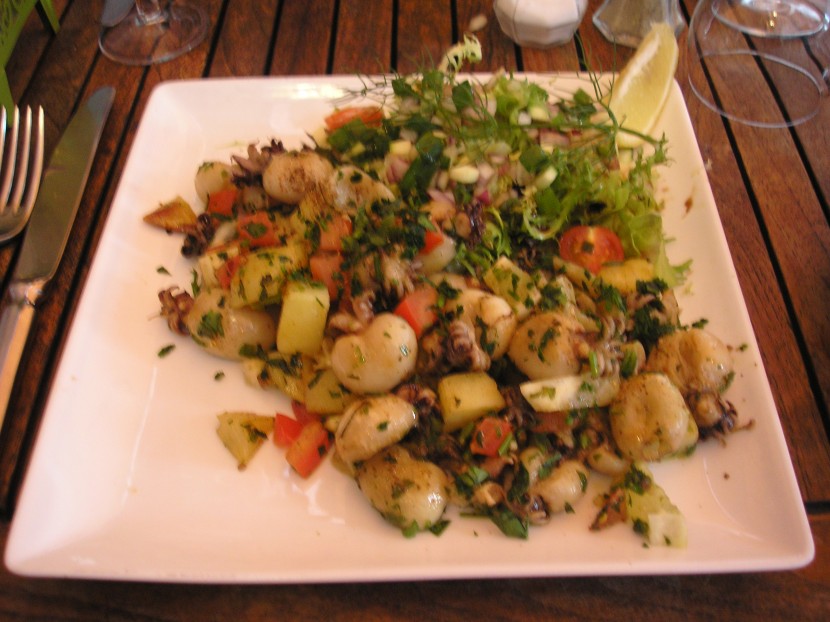 B’s second course was a special of the day:  monkfish in a veal and wild mushroom sauce served with a sweet red cabbage sauerkraut and roasted tomatoes.  B, owner of the patented Manic Mushroom Face, couldn’t resist ordering it when our server rattled off the list of “wild mushrooms” it entailed—morels, chanterelles, and black trumpets—despite his skepticism about a meat and fungi sauce on fish. Skepticism be damned, this was a nearly flawless dish and the fish couldn’t have been cooked more expertly. I’ll admit I was somewhat jealous, though he was generous in the bites he doled out (not without commensurate calamari from me, however!). 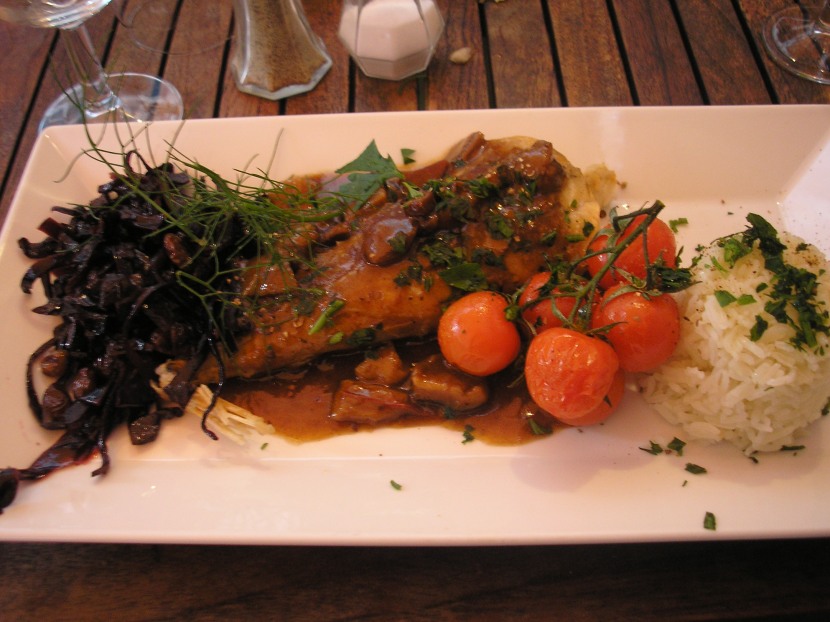 For dessert, we shared a bowl of fresh Corsican nectarines in myrtle wine, drizzled with local honey and topped with homemade peach gelato.  No picture, as we were hammered. As we strolled out of Bonifacio, sad that we couldn’t stay any longer, we were greeted by a full moon over the sea.  It was the perfect end to really amazing leg of our trip. 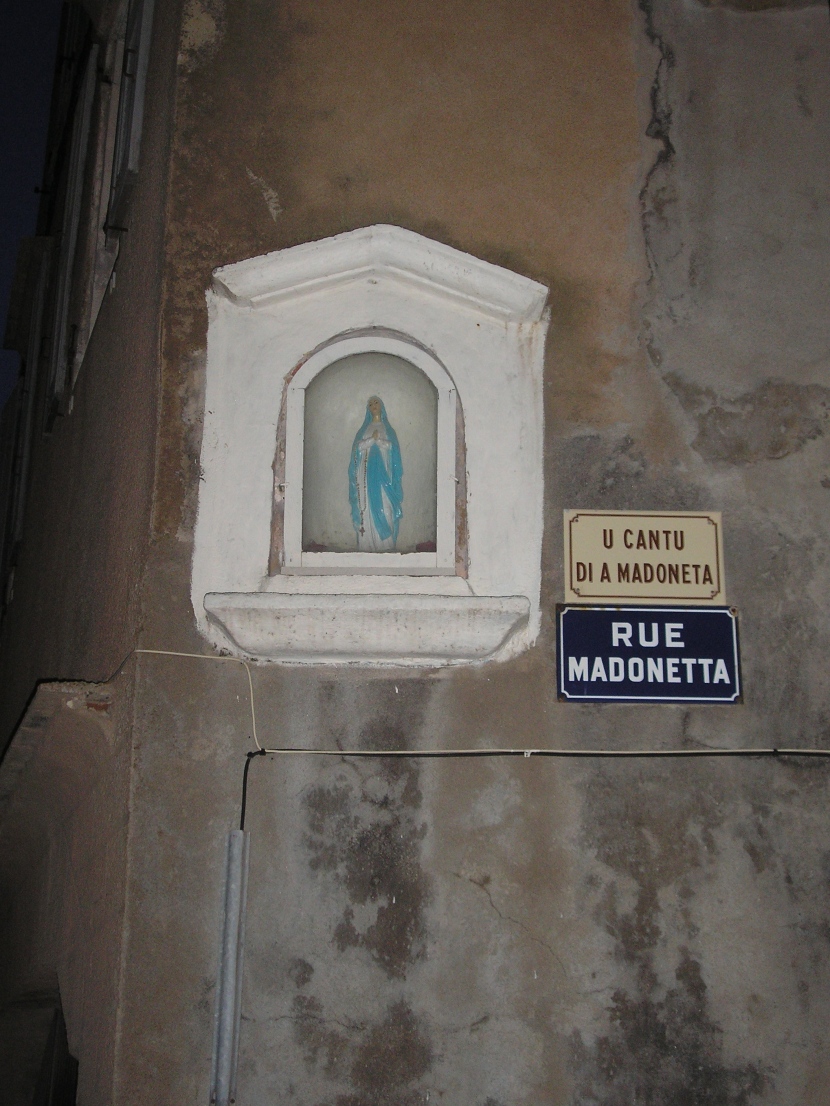 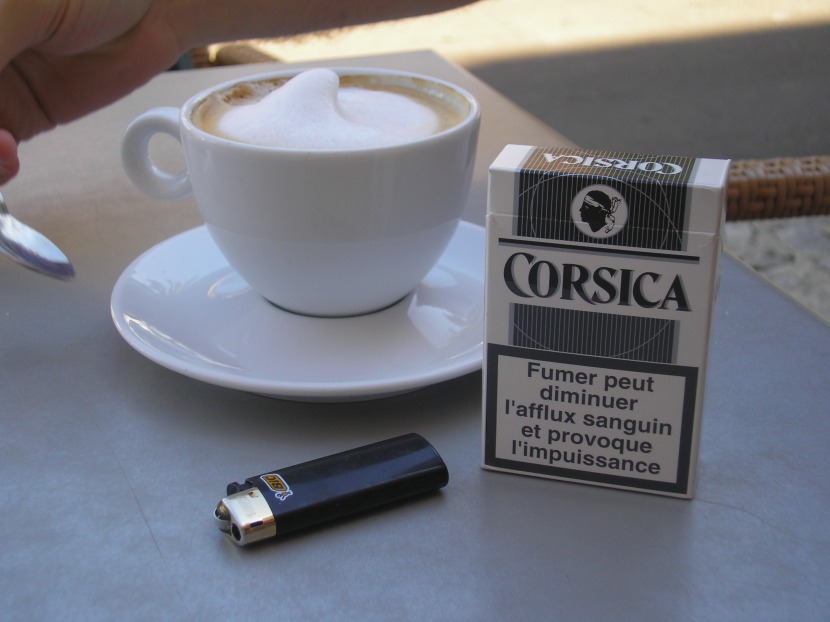 Next stop:  We get lost, and then found (culinarily at least) in Eastern Sardinia!