Our dinner at Al Taglio last weekend was a last minute decision, as we had originally planned to eat Turkish food with our new friend ME, who is originally from Turkey and determined to show us that there is more to Turkish food than döner kebab. This lesson in mind, we reconvened on Friday night at the charmingly cluttered Le Cheval de Troie (71 rue de Charenton, 75012 Paris, Métro Ledru-Rollin). I has dumbly asked B earlier in the night why on earth a Turkish restaurant would be called the Trojan Horse. He responded that Troy had been in Turkey, obviously. Like, why haven’t I been working on my ancient geography? It must be getting embarrassing to be with someone like me. All sound and fury and incapable of situating ancient city-states in modern-day nations. I’m drowning in shame.

Anyway, Troy was in modern day Turkey, dear reader. Did you know that? I suggest you get to your Iliad review pronto if you didn’t.

This whole thing was funny to me because B’s latest project involves mapping early Christian sites onto an enormous Google map, combining two of his most obsessive passions: 1) anything Biblical and 2) anything map. Most days he spends his time crouched over his laptop in what must be an excruciatingly painful position, surveying satellite images and making little whimpering noises of joy when he manages to find ruins of the original monastery run by St. Ambrose the Pallid, now gathering moss behind a gas station in rural Egypt. Or something like that.

Anyway, back to Turkish food.

We met up with ME and his daughter E, who has begun reading this blog and would like to be known as EON, the explanation for which I lost in a flurry of 14-year-old energy. Seriously, Friday night made me feel like I was about a hundred years old.  EON was on fire, cracking jokes about everyone and sketching funny anthropomorphic cartoons of us in her notebook. As the night wore on and her energy level only increased, I was struck by one of those all-too-depressing realizations of aging:  I don’t have the energy-level of a teenager anymore. Not even close. I suppose I should have realized this in one of the many classes full of teenagers that I teach, but those aren’t usually at 11 p.m. Even after a Turkish coffee, I was still yawning by the end of the meal, a fact that astounded EON. You just wait, kiddo.  Give it a decade or two.

We were warmly greeted by the proprietor of Le Cheval de Troie, which I first assumed was because of ME’s Turkish banter, but later realized was just the in-house policy.  As per usual with ME and B, we ordered waaay too much food, but everything was delicious and it was fun to try some new things. (Do I sound like a blithe orientalist yet?  No?  It’s coming.) I was particularly psyched about the large jugs of Ayran (sour yogurt drink) that we ordered, as I’m a fiend for yogurt products of all kinds.  The Ayran at Le Cheval de Troie was a lot like buttermilk – tangy and totally refreshing. I could drink it every day. 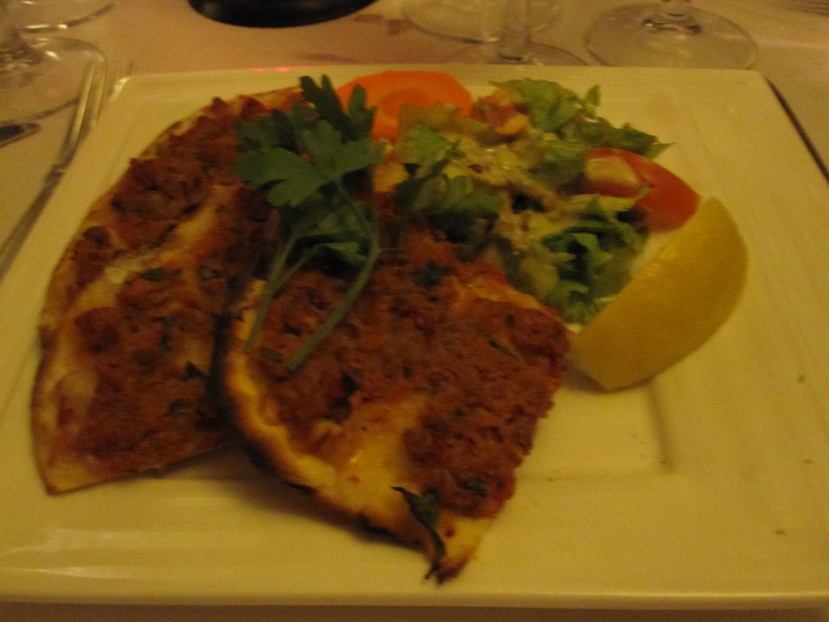 Eager for us to try everything, ME ordered everyone a plate of Kiymali Lahmacun, a kind of flatbread spread with spiced ground beef.  Really yummy, and quickly devoured by all.

B, M, and I all ordered menus, which were reasonably priced at about 20 euros for an entrée, plate, and dessert.  My entrée was kizartma, roasted eggplant and bell peppers served with a spicy garlic and yogurt sauce:

B ordered sarma (which I know better as dolmas) heavily-spiced rice wrapped in grape leaves and served with garlic yogurt sauce:

M, brave little bird that she is, ordered arnavut cigeri, or lamb livers. Usually a big fan of organ meats of all kinds, I was out of my league with this one and had a tough time getting my bite down. But M was delighted by her entrée, which as usual made me wonder why someone as cool as her still deigns to keep company with me.

Among the many delicious main plates that we ordered, I especially liked my icli peynirli köfte, heavily spiced ground beef topped with melted Kachecaval cheese:

M’s adana kebap, a brochette of ground beef spiced with garlic and parsley, was particularly lovely (no picture).  B had an amazing leg of lamb that was wrapped in roasted eggplant and falling off the bone tender:

They only serve it on Friday and Saturday nights, but it would definitely be worth the trip for on a weekend.

For dessert, we shared orders of baklava, sesame halva, dondurmali sütlac (Turkish rice pudding), and rosewater lokum (commonly known by idiots like me as Turkish Delight). All were really terrific, but the buttery-sweet baklava was something truly special.  I could have eaten an entire tray of the stuff by myself, and only begrudgingly shared my portion with my friends. Sometimes I’m such an only child.

Let’s say, for a moment, that you are one of these regressive Westerners who think that Turkish food means nothing but döner kebab, preferably eaten late at night while hammered.  In that case, I will humbly recommend what I find to be the two best kebab places in all of Paris. I’m sure anyone who cares about these things will argue that this is not a particularly great town for kebab (you’ve got to head for Berlin for that).  However, we’ve found two places that more than get the job done.

The first, Délice Dégustation (8 rue de Faubourg Saint-Denis, 75010 Paris, Métro Strausbourg Saint-Denis), is in B’s old neighborhood, the, uh, “atmospheric” Strausbourg Saint-Denis. B spent his first year in France living on rue Blondel, one of the oldest streets for prostitution in France. There have been brothels operating on this street since the Middle Ages, including the famous Aux Belles Poules (The Beautiful Chicks), a legendary Belle Époque whorehouse that counted Henry Miller among its regular patrons. Saint-Denis is still bustling hotspot for prostitutes, johns, and men who hang out in betting parlors all day. That said, rue Faubourg Saint-Denis is also a bustling, lively market street at all hours of the day. If you find yourself in the neighborhood, make sure to grab a cheap pint at Le Sully (13 rue de Faubourg Saint-Denis, 75010 Paris, Métro Strausbourg Saint-Denis), B’s favorite bar, before heading across the street to Délice Dégustation (disregard the large pizza signs that seem to trump the kebab, they don’t). Once there, grab a tray and order a veal or chicken kebab in a pita, which here is flatter and more tortilla-like bread that what I’m used to in the States. Make sure to ask for extra harissa, which is made in-house and one of the first genuinely spicy things I’ve eaten in Paris. You’ll get a giant tray of fresh-from-the-fryer fries and a döner kebab that you could easily make two meals from. Sit outside and gaze at the Porte Saint-Denis and watch the riff-raff go by. You might just see B, soaking up “the real Paris” before he scuttles back to his new digs in the Marais.

Or, should you find yourself in Belleville after a late-night concert at La Maroquinerie, La Bellevilloise, or Café de la Danse, may I recommend a stop at the inimitable Döner Burger (52 rue Ménilmontant, 75020 Paris, Métro Ménilmontant).  This place takes fast food to a whole new level. Served sandwich-style in a fluffy bun, their signature döner burger is my bar-none favorite drunk food in Paris.  Or, you can get a spicy, totally satisfying köfte burger.  Either way, make sure and also order an ice-cold two-euro Efes beer, one of the best deals in town. The guys who run the place are really great and seem to be rather obsessed with watching episodes of Dawson’s Creek that have been dubbed into Turkish. I don’t need to tell you that this alone would seal the deal for someone like me.

We saw the newest Woody Allen flick You Will Meet a Tall Dark Stranger this weekend. I really enjoyed it, but that of course is kind of a no-brainer for someone like me. B has recently noted that I have kind of a limited taste for genre and tend to gravitate only towards films about neurotic upper-class urbanites. In an effort to counteract this, he has been making me watch Battlestar Galactica, which I wanted to hate but am now entirely obsessed with. This is a big step for me, as I’ve always detested sci-fi or fantasy of any kind. I’ll admit that I still get pretty anxious about how quickly the narrative can spin out of control when you set your television series in “a possible universe,” rather than limiting the scope of the action to the island of Manhattan. But regardless, I’m hooked. B woke up in the middle of the night a few days ago to me yelling “Oh my god!  The fence isn’t real!  The fence isn’t real!  The Cylons are coming!” When he woke me up and asked what I was dreaming about, I apparently eyed him suspiciously and declared that I was confused, but it was still possible that he was a Cylon. I have no recollection of this interchange, but still find it pretty funny. Before long I should be playing Dungeons and Dragons and reading the Wheel of Time. Or not. Maybe I’ll just stick with New Yorker-endorsed sci-fi series for now. Gotta take the long dark path into real-dorkdom nice and slow.