Today I met my lady love M for lunch at the Canteen at Merci (111 boulevard Beaumarchais, 75003 Paris, Métro Saint Sébastien-Froissart) a concept store in the Marais. The enormous, three-floor warehouse-style space sells clothes for men, women, and children, as well as housewares, furniture, used books, stationary, and a handful of other things that you absolutely don’t need in this or any other universe. I’ll officially lose all lefty street cred by admitting this (did I have any remaining?), but I really love this store. Or, better put, I would really love this store if everything didn’t cost as much as my rent.  I understand that the idea behind a “concept store” is that it is a tightly-curated assemblage of objects from a variety of brands, usually in a beautiful or otherwise arty space. Everything at Merci is gorgeous or interesting. Everyone who shops and eats there is gorgeous and interesting.  Going to Merci is like walking into a parallel universe where everyone is a hip Paris gallery owner or a necktie designer. Perhaps a testament to my own bobo pretensions, I actually say “concept store” now, so the prelude dialogue sounds something like this:

B: Where are you and M going to lunch today?

B: Is it a restaurant?

Me: Um, sort of.  It’s a lunch place inside of a concept store.

B:  A concept store?  Like things are only theoretically for sale?  <smirk>

Later, after I had gotten dressed, I asked B how I looked. “Like you are having lunch in a concept store,” he responded. Honestly, I would hesitate to take him to Merci, or any of the men in my life to Merci, as it it takes “bobo affectation” to a whole new level. But, there is a handsome café near the street lined with used books for sale and inexpensive coffees, and a beautiful garden in the center of the complex, both of which the boys I hang out with would really like. But today was a ladies lunch and we did it up to the max. After browsing through the store, which amounted to little more than cooing as we stroked various handbags and wimpering as we fingered scarves, we headed to the basement where La Canteen Merci is housed. I didn’t take many pictures, because concept stores don’t like it when you take pictures, probably because they are afraid that other people will steal their concepts.

So you’ll just have to trust me when I say that La Canteen is a beautiful, whitewashed space with both small tables and long communal ones. The back wall is composed of floor-to-ceiling windows that look out on a courtyard garden, a space so sublime that whatever garden or green space you call your own will surely seem wanting.  I don’t think you can actually go in the garden itself, though it is appointed with a perfectly rustic set of chairs, so I usually spend a few minutes fantasizing that the Merci courtyard is my own and I spend my long afternoons reading there. Clarence usually shakes me out of my reverie to examine the central table at Merci, where all of the salads, tartes, and desserts that have been prepared for the day sit in white ceramic bowls and terrines (all for sale at Merci, of course). There is usually a savory tart of the day, as well as seasonal soups, a meat dish, and some lovely cheeses (including a heavenly molten St. Marcellin, which you can make easily at home by putting a St. Marcellin in the oven for a few minutes before you serve it). For my money, however, the star attraction at La Canteen is the salads, the amazing, perfect, I-could-seriously-become-a-vegetarian-over-this salads. While I always contemplate ordering something else, I always end up getting the grande assiette des salades (14€, and a much better deal than the petite assiette, 9€). The big plate comes with a small serving of all of the salads of the day, which are always organic, local, and celebrate seasonal produce. 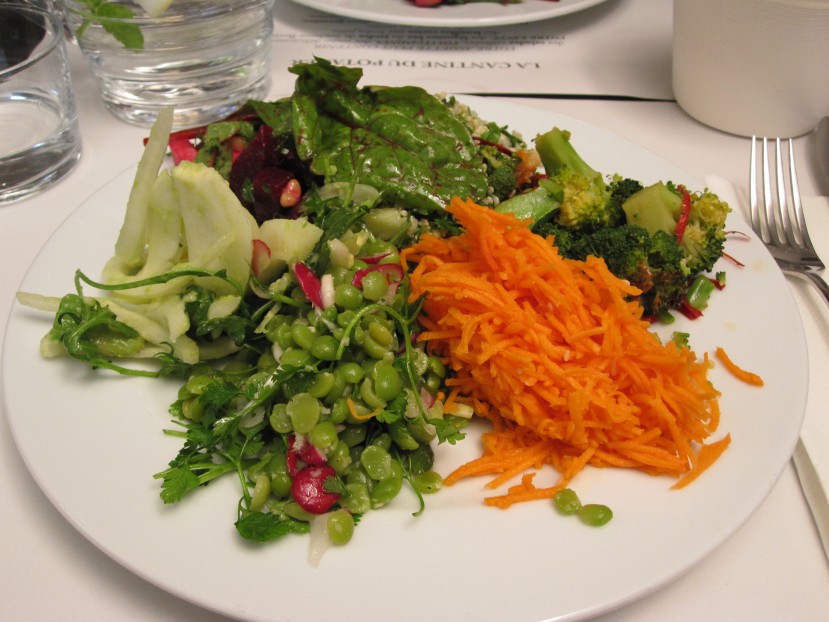 Let’s start at the carrots and move clockwise, shall we?  First, the traditional French grated carrot salad, but instead of a lemon vinagrette, M figured out that they dress theirs with a sweet orange juice. So sweet and simple and familiar, but also totally unexpected.  Next, we have fresh peas cooked al dente, served with thin slices of baby radishes and cilantro. This is followed by roasted fennel, dressed with an avocado vinagrette. In season, they sometimes put pomegranate seed in this one, which is a truly inspired salad combination if there ever was one.  Next we have a mélange of green apples, red beets, pine nuts, and baby beet greens, all dyed an amazing fuschia from the beet juice. Following that (and slightly obscured by a beet green leaf) is La Canteen’s quinoa salad, out of which I discern fresh mint, parsley, and lime juice. I’ve tried to replicate it and it’s impossible. I have no earthly idea how they get their quinoa so light and fluffy, but if I could make this at home it would go a long way in putting quinoa in my diet in a more serious fashion. Lastly, we have a slightly spicy roasted broccoli. Everything is served with a fresh baguette.

Let’s be honest guys, I don’t really like vegetables.  I’m not really a person that you’ll ever hear say, “Man, I’m really craving some GREENS!”  In fact, I could probably subsist entirely on meats, cheeses, and breads without much complaint (pickles don’t count as a vegetable, right?)  The fact that I actually get excited about Merci’s salad plate is a testament to how fantastically fresh and well-handled these salads are.  Better yet, if you eat all your vegetables, you have a good excuse to order dessert:

While today they also had a tempting moelleux au chocolat and a fluffy carrot cake, M and I settled on their apple and red berry crumble, which is a house staple made with seasonal fruits. It’s always everything you’ve ever wanted a crumble to be, and ours had just been pulled out of the oven.

Lest you think that all I do is brag about yummy things I’ve eaten without the possibility of sharing them with you, let me now direct your attention to this La Toquéra video from Le Fooding.  Here, the chefs at La Canteen Merci prepare their signature crumble with rhubarb and strawberries.  The recipe is also included, so you can make it at home if the mood strikes you. We’ve been seeing some beautiful apples at the market lately that are just begging for a crumble, but alas, ovens are for only the very lucky in this town.

How are you today dear reader?  I hope you are having a lovely autumn day.