First off, I know you won’t listen to me on this, but will you please skip going to Shakespeare and Co.?  Pretty please?  Talk about a reputation having outlived a function.  I’ve never found anything particularly interesting there besides some entitled American backpackers and a surly, unhelpful staff.  Yes, they do occasionally have interesting authors speak, but interesting authors speak all over Paris, all the time.

Instead, if you are looking for pleasure reading in English, I would recommend you visit The Red Wheelbarrow Bookstore (22 Rue St Paul, 75004 Paris, Métro Saint Paul), a small but jam-packed space in the Marais with an extremely friendly staff and a well-curated selection of serious literature, books about Paris, cookbooks, and a rather extensive children’s section. If you are going to be in town for a while, they will happily order things for you that are not currently in stock. I’ll always have a soft spot for this bookstore, as it was one place that I could always count on having a pleasant chat with another human being after a series of long, lonely days.

For a more extensive selection, but perhaps less charm, I’d suggest you push past the tourist crowds waiting in line for hot chocolate at Angelina (why?!) and visit Librairie Galignani (224 rue de Rivoli, 75001 Paris, Métro Tuileries), ostensibly the “first English language bookshop established on the Continent.” Whether or not this is true, Galignani has perhaps the largest selection of fiction in Paris, often offering both the American and the British imprint of various books (this can mean a significant difference in price, though English-language books are always expensive here). In particular, Galignani has a peculiarly well-appointed selection of author autobiographies, biographies, and compilations of letters in a side room, so if that’s your jam, head on over.

For art books, slick stationary, cool kid’s books, and one of the most extensive postcard selections in Paris, visit the Librarie Flammarion inside the Centre Pompidou (Place Georges Pompidou 75004 Paris, Métro Rambuteau). We usually make a habit of meeting here before events at the Pompidou, and it is a rare occasion that all three of us can leave without somebody buying something. Many of the artist monographs on sale are in English, and it’s worth inquiring to the staff if something in particular you want is available in English. Most of the Centre Pompidou’s own gorgeous monographs (must. stop. buying. ten. pound. books.) are issued in English as well as French.  Flammarion is especially notable for their year-round sales, making many of their expensive books up to fifty percent off. A must, especially if you are already visiting the Pompidou, which is in itself a must. I live only two blocks away, so give me a holler when you’re finished and I’ll meet you for a coffee upstairs and we can examine your booty together.

I could literally write about French bookstores all. day. long. As any nerd will tell you, Paris is a book-lovers dream. I daresay that nowhere else in the world can you find such beautiful, serious, and well-stocked bookstores on nearly every street as you can in Paris.

If you are making like Sartre and de Beauvoir and taking an overpriced coffee at Les Deux Magots, may I suggest that you pop in to La Hune (170 Boulevard St. Germain, 75006 Paris, Métro Saint Germain des Près) and pick up some serious reading. Over sixty years old now, many important writers have browsed this shop and given readings there. And while I don’t think that André Breton is dropping by anytime soon, La Hune still has a pretty knockout list of authors that regularly stop by for book signings.

Another Left Bank favorite and the best recommendation I can make to other literary scholars is Librarie Compagnie (58 rue des Ecoles, 75005 Paris, Métro Cluny-Sorbonne).  Oh man, can I do some damage here. Obviously, this is one of the main bookshops associated with the Sorbonne, so their selection of literary, theoretical, psychoanalytic, and political texts simply can’t be beat. They often stock both the mass market paperback editions of texts as well as the handsome Gallimard and Éditions de Minuit texts. We’re getting into book snob territory here, so forgive me if this is all Greek to you. Moreover, they host a regular series of lectures by important literary and theoretical authors, many of which transcend the traditional author meet and greet to discuss contemporary politics and culture at large. The staff is extremely sharp, and they often have a good beat on what is going on at the Sorbonne as well – make sure to check out the window displays and the front table, where you will find pamphlets and flyers for upcoming lectures, conferences, and film festivals. One of our favorite ways to spend a winter afternoon is to browse for a while at Compagnie, then head across the street to rue Champollion for a movie at Le Champo or La Filmothèque du Quartier Latin, and finally end up at Le Reflet (22 Rue Champollion, 75005 Paris, Métro Cluny-Sorbonne) for a glass of wine and a chat. Feel free to rip that itinerary off anytime you like. I guarantee you won’t be disappointed. 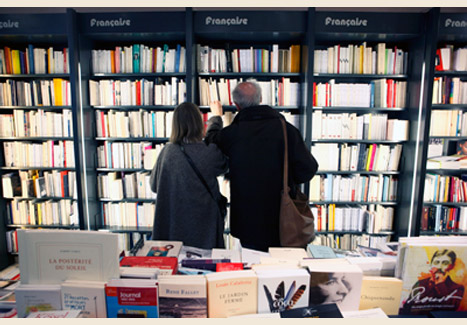 Should you find yourself in the opposite side of town in Montmartre, I can’t recommend enough a visit to Librairie des Abbesses (30 rue Yvonne Le Tac, 75018 Paris, Métro Abbesses), a smart and well-stocked store with a drool-worthy selection of novels and poetry from small presses, hip design magazines, and an interesting selection of specialized cookbooks. The proprietress is a particularly sassy Montmartre personality and one of M’s favorite eccentric characters in Paris.

Many of you may know that one of my academic interests is in psychoanalysis. Much to my continuous delight (and my pocketbook’s dismay), many bookshops in Paris are well-stocked with texts on this subject that would be either extremely expensive or virtually unavailable in the United States. I’ve been particularly lucky in my own Marais neighborhood in finding books that are of particular interest to me (and perhaps a handful of my readers). The lovely Les Cahiers de Colette (23/25 rue Rambuteau 75004 Paris, Métro Rambuteau) is well-stocked with both classic psychoanalytic texts as well as the newest releases in the field.  They also carry all of the major French psychoanalytic journals and their back issues for at least a year or two.

Another local Marais favorite is Librairie Michèle Ignazi (17 Rue Jouy, 75004 Paris, France), The shop is run by an extremely helpful and knowledegable woman and they stock (among other things) an amazing collection of limited-edition poetry books.  Ignazi and all of the other bookshops listed above are a great example of a particularly Parisian seriousness of bookstore employees. There are no blank-faced, doughnut-eyed Barnes and Noble employees at these stores. These are people who take their trade seriously and are eager to talk to you about your purchases and help you find things in their (often stuffed to the brim) stores.

There are two other places that I would be remiss if I didn’t mention, though they certainly veer more towards the American model of book megastore (with its attendant clueless and apathetic employees).  The first is the sprawling Gilbert Jeune empire with its eight locations clustered around Saint Michel (just take the metro to Saint Michel and look for the yellow awnings). The go-to source for students in Paris, Gilbert Jeune is arranged according to academic topic, with heaving crowds during the beginning and end of the academic semesters. It’s chaotic, but it’s also one of the best sources of well-organized used books in Paris, and you can often find a bargain. Additionally, their top-floor selection of mass market (livres de poche) paperbacks can’t be beat, especially if you are looking to buy in bulk (guilty as charged). To the Paris newbie, I’ll pass on the following tip:  when I first moved to France, I was perplexed by the pricing system of livres de poche. M patiently explained to me that each book is marked on the backside with a category code (usually a letter and a number, like F6) which corresponds to a pricing matrix that is posted on a wall somewhere in the store. I’m sure none of my readers are nearly as daft as I was last September, but just in case, I thought I’d pass that one on.

If all else fails and you can’t seem to find a particular book anywhere, I’d recommend that you steel yourself and visit FNAC (1 Rue Pierre Lescot 75001 Paris, Métro Les Halles). This multi-story French institution sells just about every gadget under the sun and has a stunningly large selection of books at the lowest prices in town. Not for the faint of heart or for anyone who can’t handle crowds, FNAC will certainly have what you are looking for, that is, if what you are looking for is available in France. Their staff is comedically unhelpful and I often find it is best to browse their website before entering the madness. Expect check out to take six lifetimes and to sever the final threads of patience you might still have remaining after battling the escalator crowds. Avoid at all costs in December and January, unless Black Friday-style stampedes are your thing.

For rare and used books, I can’t recommend enough a visit to the Marché du livre ancien et d’occasion, held year-round every Saturday and Sunday from 9 a.m. to 6 p.m. (Parc Georges Brassens, 104 rue Brancion, 75015 Paris, Métro Porte de Vanves). A remarkably large selection of both valuable collectors books as well as bargain paperbacks, a book lover will be able to spend a whole day browsing here and thumbing through their treasures in the lovely Georges Brassens park that surrounds the market. I took B here for his birthday. Another one of our favorite things to do is to browse the bouquinistes that line both sides of the Seine around Notre-Dame. A Paris institution since the 1500s, the bouquinistes have little overhead and often offer books at lower prices than you will see anywhere else in Paris (especially if you are buying the coveted hardbound La Pléiade editions of classic French authors). Many bouquinistes also sell interesting vintage maps, print advertisements, and antique postcards, though at slightly higher prices. They are a great place to find gifts and a lovely place to browse as a tourist. I don’t make a habit of it, but you can bargain at both the Marché du livre ancien and with the bouquinistes.

So that’s my list, friends, but I know that this is the tip of the iceberg as far as this town is concerned. Please tell me about your favorite Parisian bookshops in the comments!