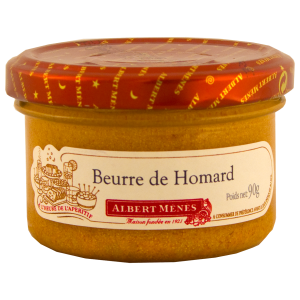 To catch up those of you just tuning in, this is the second of a multi-part (how many parts?  GOD ONLY KNOWS!) series on shopping in Paris.  In our first installment, I told you all of the places that I like to spend money on books, information that I’m sure was terribly interesting and extremely useful to those of you reading this from Iowa.  Now, I’m handing things over to Clarence so that he can tell you where to buy foodie things to stow away in your suitcase.

A question I’ve been often asked by visiting friends is “What would you stuff your suitcase with on a trip back to the US and where can I buy it?” Now, Clarence makes it virtually impossible for me to carry on my luggage, as it’s usually filled with jars of liquid carefully wrapped in socks. So buyer beware, my suggestions are not particularly TSA-friendly. 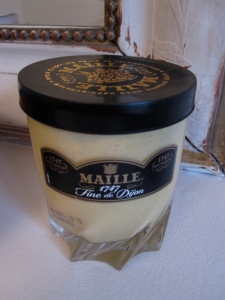 Maille (6 place de la Madeleine, 75008 Paris, Métro Madeline), which has been making mustard since before the Revolution, makes some of the yummiest mustards you can imagine. I wouldn’t have really thought of myself as a mustard-nut until Maille entered my life, but now I am a verifiable lunatic.  The basic Maille mustards (both classic dijon as well as ‘à la ancienne’ with whole mustard seeds) are available on the cheap at any grocery store in Paris and make a handsome gift, especially if you snag one of the cut-glass jars that doubles as a whiskey glass when you finish the mustard.However, Maille mustard like this (in some form, I’m told) is available in the US at some specialty markets.  If you want to get something singular, head over the Maille store and purchase one of their specialty flavored mustards.  We love the chablis-morel and the hazelnut-death trumpet versions, but all the different varieties sound like they would take a sandwich (or a mustard cream sauce on pasta) to a whole new level.  Maille also makes the best cornichons in the universe.  I go through a big jar every week or so. I’m told these might be available in the US, but I would probably stash a few jars in my luggage just in case.  I also have the mentality of a hoarder, so take all of this with a grain of salt. 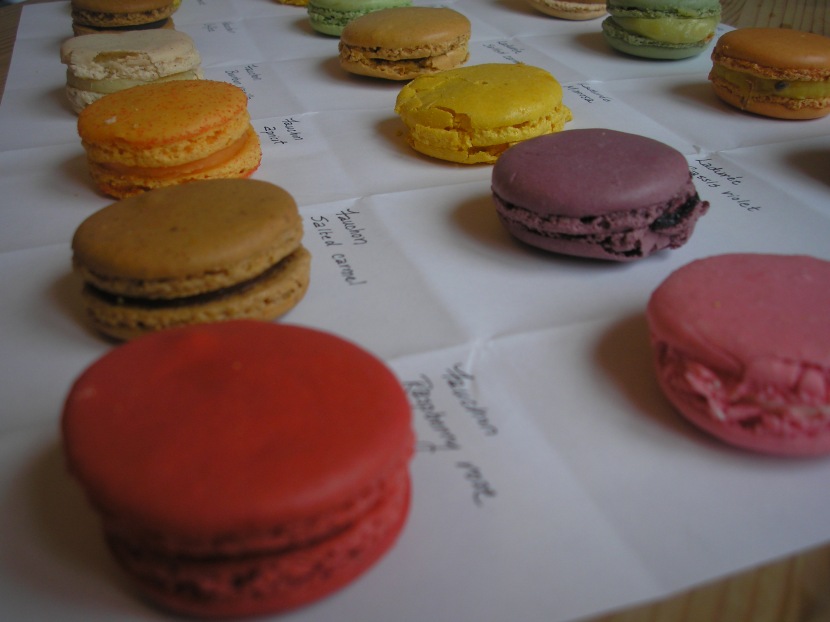 Regular readers know that Pierre Hermé (many locations around Paris) is the winner of the macaron Hungerdome, and therefore wins the dubious honor of being the first and only macaron shop that I take my visitors. But seriously, they do such a lovely job of packaging their singular creations that I can’t imagine why you’d buy a gift of macarons anywhere else. Just remember, they get stale in a heartbeat, so it’s best to buy any macarons for gifts the day you are leaving town. Moreover, no matter how cleverly they are packaged, they are fragile and bound to take some hits during travel. I’d probably instead select one of Pierre Hermé’s beautifully boxed collections of chocolates or tea, which I suspect would fare better than the macarons, which I regard as an “in Paris only” treat.  But since some of my readers will likely quibble with me on this, I’ll hold my tongue. Caveat emptor. Stick them in a refrigerator if you can, that will extend their lifetime somewhat. 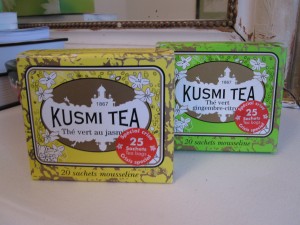 Many of my guests can’t wait to visit the venerable teahouse of Mariage Frères (look it up yourself, I’m sure not going there with you), which is a regretable stone’s throw from our apartment. Look, go there if you have to, but it’s massively overpriced and will give even the least claustrophobic person a headache. The real tea fiends I know (and I am not counted in this observation, as I am a coffee drinker to the core) seem to prefer Le Palais des Thé (64 Rue Vieille du Temple, 74003 Paris, Métro Hôtel de Ville) which seems to have a similarly large and studied collection of classic black and green teas as Mariage Frères, minus the ludicrously expensive packaging and the hoards of tourists. I recently overheard a young woman blathering outside of Mariage Frères about how this is the “best tea made in France” and I refrained from explaining that no tea is “made in France,” rather all tea bought here is imported and packaged in Europe, holy god don’t they teach you anything about colonialism in school anymore, insert the sound of brain exploding. That aside, I’d also recommend Kusmi Tea (locations around Paris), which has brightly packaged boxes and tins of both bagged and loose tea. I particularly like their Jasmine Green and their Prince Vladimir varieties, and find that the small assortment boxes that are sold at Monoprix make a nice gift for someone who you have no idea what to buy for. 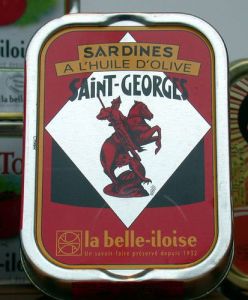 I’ve already waxed poetic about La Grande Epicerie here plenty of times, so I won’t bore you with another sonnet to my favorite Parisian foodie institution. There’s no place better in town for picnic fixings.  I’d also recommend you pick up your specialty Maille mustards there and check out their assortment of canned fishes, which includes the largest selection of La Belle-Iloise and Rodel sardines and anchovies I’ve found in Paris. (Yes, I carry cans of fish back to the States. What of it?) That said, many of the other shelf-stable products you will find at La Grande Epicerie you will also find much more cheaply at a larger Monoprix (locations around Paris), including Bonne Maman jams that are not available Stateside (Frenchies don’t know how lucky they are — the yummiest and best ones are sold in thinner, taller jars with purple checkerboard lids and labelled “Fruitée Intense”), various Bonne Maman cookies (we love the tartlettes and the financiers), and Albert Ménés rilettes and pâtes (or my favorite, their lobster butter). Other great (and cheap) gifts for foodies include Speculoos à tartiner (a gingery spread that is the consistency of peanut butter but tastes exactly like the Speculoos cookies that accompany many coffees in Paris) and crème des marrons (a chestnut spread that is often found at crêpe stands but hasn’t seen the global distribution of Nutella).  You can also buy shelf-stable foie gras at both La Grande Epicerie and a larger Monoprix, something that your friends in California will be thanking your for effusively in the next few years. 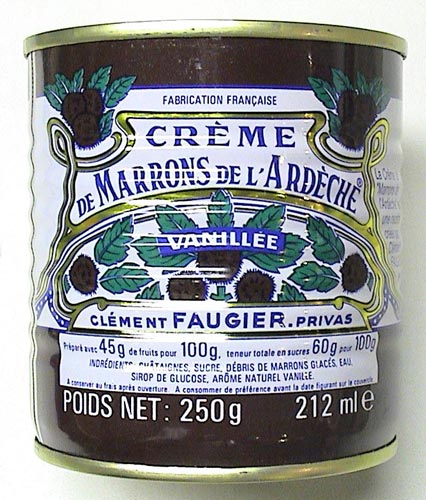 Okay, so let’s pretend that you are a real stick-in-the-mud and refuse to check your luggage to accommodate all of these liquids. Where might one buy some non-perishable gifts for people who spend most of their time in the kitchen?  Well, for the friend who can’t cook but likes to entertain in their impeccably curated home, I’d recommend a visit to the homewares section in the basement of the concept store Merci (111 Boulevard Beaumarchais, 75003 Paris, Métro Saint-Sébastien-Froissart), where you can buy all kinds of lovely (if somewhat frivolous) objects, including all the Pantone mugs in every shade your heart could ever conjure up. 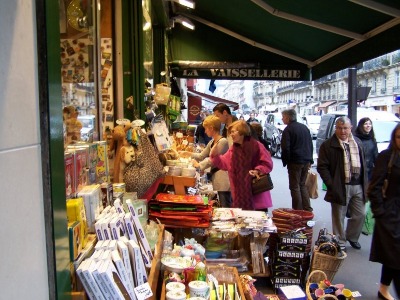 Or, brave the jam-packed La Vaissellerie (92 Rue St Antoine, 75004 Paris, Métro Saint-Paul) for everything from clever dish towels to a rainbow of multicolored marmites. I especially like their crushed Solo-cup espresso cups, their wood-handled cheese knives, and their brass Champagne stoppers (a real bargain at 1 euro a piece). For real cooks, head to the cavernous E. Dehillerin (18 Rue Coquillière, 75001 Paris, Métro Châtelet). Once you’ve finished gawking at the copper pots, duck presses, and human-body sized cauldrons in the basement, head upstairs to the small goods area and pick up an oyster-shucking knife and glove or a non-stick rubber Madeline pan for your favorite chef. 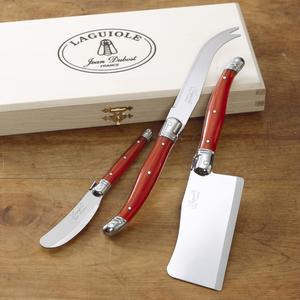 Do you really like them?  I mean, really really? Then go to Laguiole (35 Rue Deux Ponts, 75004 Paris, Métro Pont Marie) and buy them a set of horn-handled steak knives, a wooden bottle opener, or the perfect set of cheese knives. You’ll see plenty of imitation Laguiole while in Paris (the distinctive honeybee on the handle), but the real deal is the real deal, and would make even the most difficult snob swoon.